Turkey is in the news again, this time for a monumental step forward. It recently opened the doors to the first Turkish mosque designed by a woman, the Şakirin (shah-KEER-een) Mosque. And it’s STUNNING!
After learning about it last week, a number of us made a weekend trek to the conservative community of Üsküdar to check it out. After a good deal of help from Turks on the bus, we found it. And believe me, we were not disappointed—not at all! 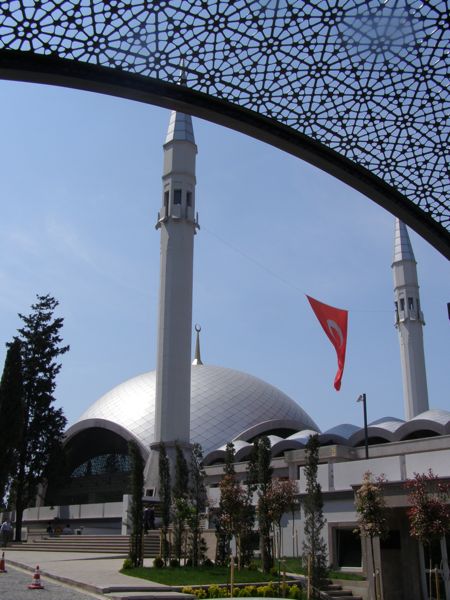 The Şakirin Mosque from its entry gate

Architect Zeynep Fadillioğlu has designed many upscale homes and hotels around the world, but according to a recent BBC article, she said she cried when she was offered this particular project. Although Turkey is a secular democracy, women often still find themselves bucking traditional expectations, and Fadillioğlu was asked to open a new frontier for Turkish women. The  typical prayer area for women in most mosques is segregated or screened off at the back of the mosque. Not so in the Şakirin Mosque. In fact, the area “designated for women” is the balcony, which seems to float above the lower level, surrounding the magical glass droplet chandelier that graces the center of the dome. 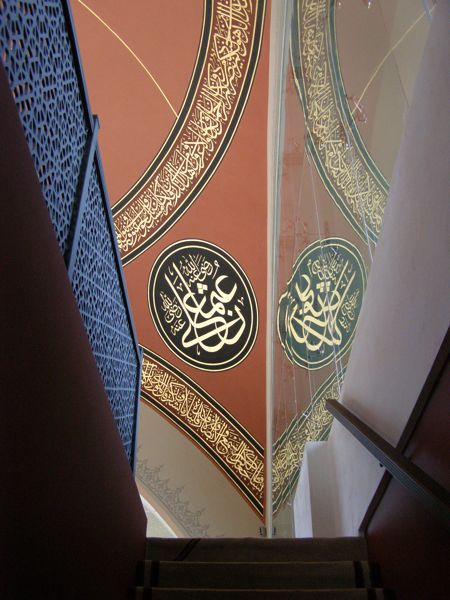 Looking up the stairs to the balcony 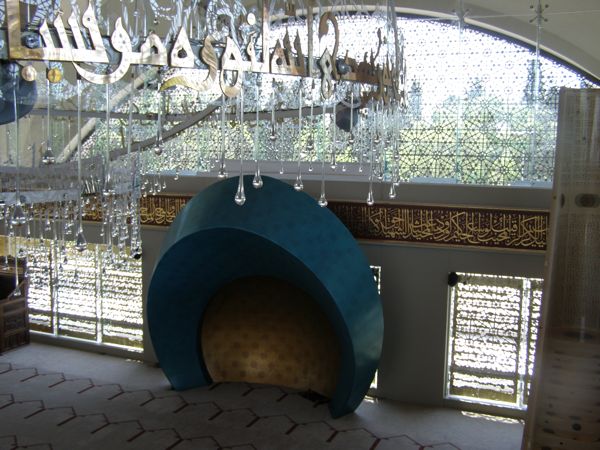 View from the balcony

You’d have to be there to understand why my eyes filled with tears as I entered that upper level. It was the best of the best; the pinnacle of the mosque experience. Designated for the women.
Commissioned by the Şakirs, a very wealthy Arab Turkish family, the mosque was built to honor their deceased mother. It combines both modern and classical elements, incorporating fountains, light, and inviting the surrounding greenery through it’s airy glass surround. The mosque sits majestically on a hill at the edge of an ancient cemetery. 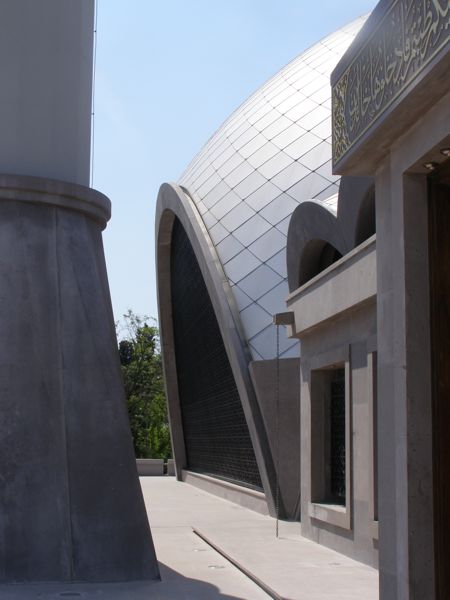 An exterior view of the mosque

After marveling at the elegant exterior design of the mosque, one enters the courtyard to see a dome-like fountain that reflects the fluted roofs surrounding it. 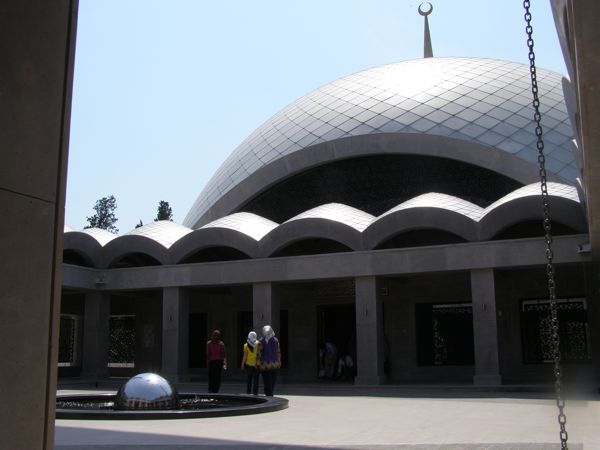 The fluted roof surrounding the courtyard… 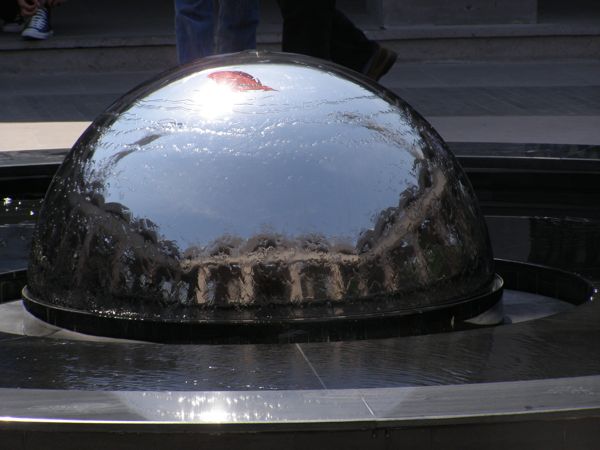 …and the domed fountain that reflects its image.

As you enter the mosque itself, the first thing that catches your eye is the mihrap, the niche that indicates the direction of mecca. The Şakirin mihrap is a golden niche surrounded by a bold, turquoise tulip-shaped frame.
I was particularly taken with the mahfili, what we would consider the pulpit. Often a centerpiece in classical mosques, this one seemed to flow smoothly from the floor to the glass windows above the back wall. It was molded in what looked like a beige marble, covered with what I thought were Arabic letters. As I drew closer, though, I realized that the pattern was actually an intricate design of dried flowers, again pulling the natural world into the mosque’s interior. 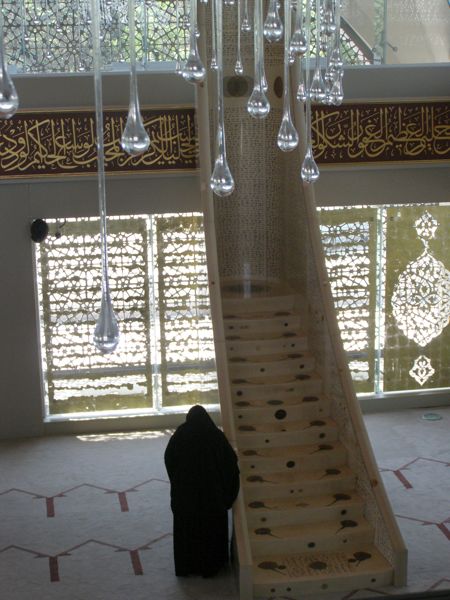 A woman prays beside the mahfili, the mosque’s stylized “pupit” 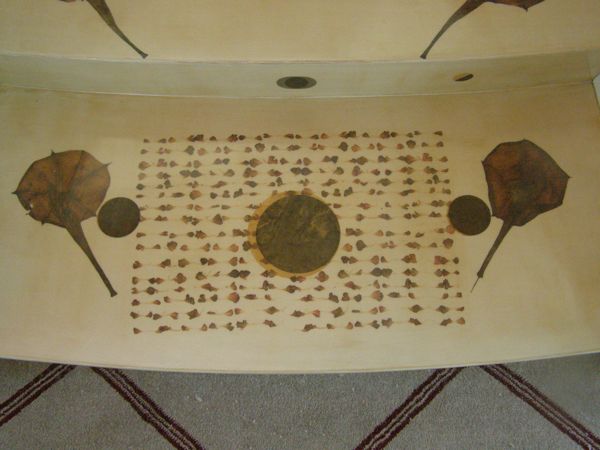 A close-up of the dried floral designs gracing the mahfili

And then there’s the chandelier. Oh, my goodness! Hundreds of blown glass droplets hang from a circular flowing arrangement of Arabic lettering and clear plastic calligraphy-like designs. I can’t wait to return in the evening to see the dome and interior of this stunning mosque lit by that myriad of glass droplets. 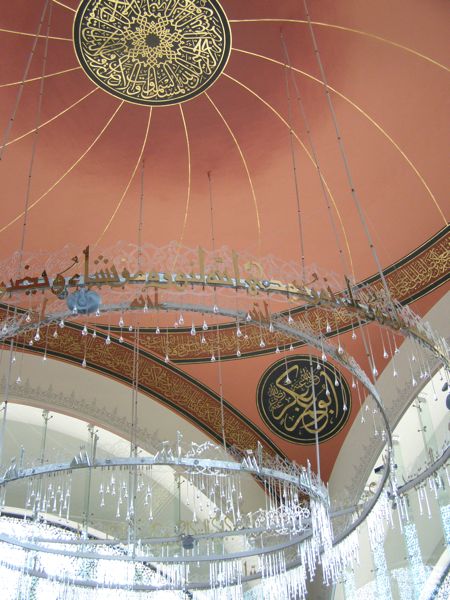 A magical chandelier reflects both light and color inside the airy mosque. 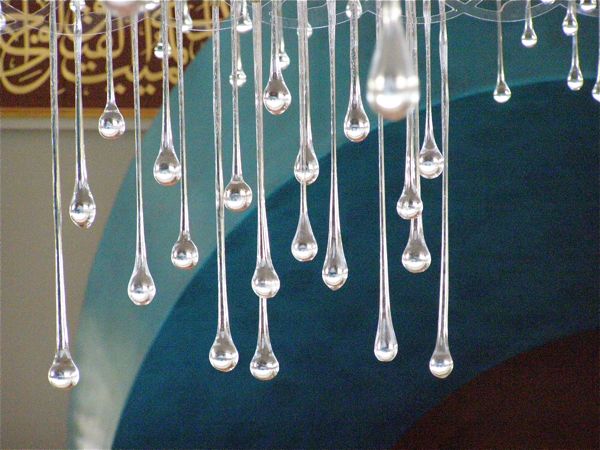 Of course, there has been controversy over this new mosque. Fadillioğlu admits that she expected problems during the construction of the mosque, and she was pleased when nothing came up. Since its opening, however, a number of Islamic traditionalists have spoken out against a woman “overstepping” her position in Islamic society. Many refuse to set foot in a mosque designed by a woman, but while we were there a number of traditionally dressed worshippers prayed in the sanctuary. Many Turks applaud this progressive step and look forward to women becoming more involved in Islamic worship. 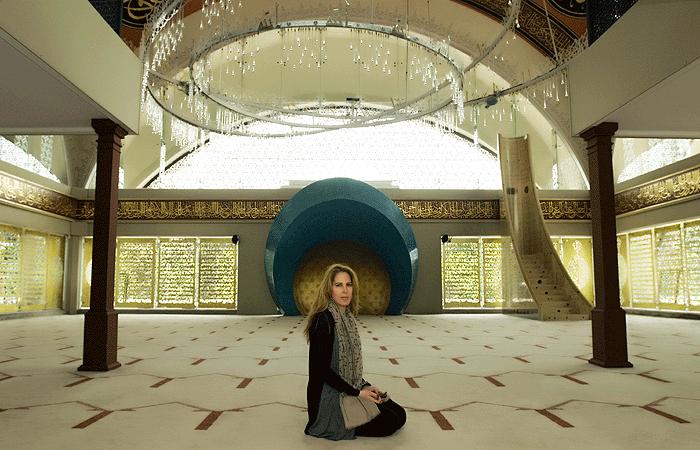 For more information on the mosque (and the issues that surround it), check out these web sites.

BBC Article on the Şakirin Mosque

German Web article on the mosque

One thought on “A Woman’s Mosque”