I’ve been slacking on this blog since I got home (last July), thinking there was little reason to continue it. Little did I know I could also use it as a platform for making contacts for my new memoir (yet to be finished) about my years in Turkey.

I just attended a Writer’s Digest Convention in New York last weekend, and I learned that if I want to interest an agent in this project, I have to build a huge “platform” of many thousands of contacts I can use to promote the book when it comes out–followers, so to speak. In spite of the fact that I’m scared shitless of Twitter, I’ve just joined and I already have eleven followers. Now I just need to figure out what to post. I don’t really use a cell phone, so it’s going to be just computer messaging. In due time…

As for the memoir, I’ve written just over 40,000 words, so I’m about half done. I think what I’ll do is start posting excerpts here on my blog in hopes that some of my friends will start following me again. So—for your information and edification, here’s a bit of the introduction to my book. If you have suggestions, please share them with me. 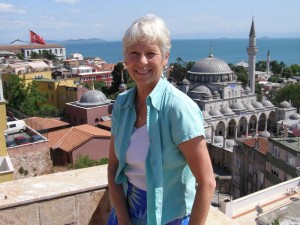 “Why Turkey?” my son said with a tone of doubtful concern. His reaction reflected that of many friends and family when informed of my move.

“Oh, I’m jealous! Turkey is my favorite place in the entire world,” was another reaction—this from people who had been there.

One of the silver linings of my divorce after 32 years of marriage was the freedom to teach abroad. I’d long dreamed of teaching in another country, but my husband was unable—read unwilling—to make that shift. My tight finances as a single also meant at least three extra years of teaching, so I decided to treat myself to a grand finale. I would teach overseas—a reward for 30 years of dedication to thousands of adolescents and their fluctuating devotion to literature and writing.

In the spring of 2003 I attended a session on international teaching at an English teachers’ convention. My heart pounded as I scribbled copious notes. Moderators Bob and Carol Strandquist had taught in both England and Norway, and after tantalizing us with fascinating tales, they shared information about websites, fellowships, and recruiting fairs. I was a bit jealous of them. Why hadn’t I married a teacher interested in overseas teaching? At the same time, I was eager for my own adventure. The next day I registered with TIE Online and the University of Northern Iowa, the cheapest and most accessible recruiting tools available. I paid their fees and posted my resumé on both sites.

I set my sights on Spain, since I wanted to improve on my paltry knowledge of Spanish. Barcelona sounded exciting, so I sent them a resume. In the spring of 2004 my district was in the midst of disheartening contract negotiations, and my heart fluttered when TIE Online posted a drama opening at a mountain chateau school in the Alps. Unfortunately, I’m responsible. I was committed to another year in Grand Marais, so I swallowed my excitement and stayed put.

Enter John Chandler, the director of the Koç School in Istanbul, Turkey. (Pronounced Coach) He sent an e-mail encouraging me to consider a position at his school. Koç? Weird name. Istanbul? Pretty exotic. I wasn’t even quite sure where it was, much less whether I wanted to go there. I searched it out in my National Geographic Atlas, then visited the school’s website. Hmmm…nice apartments, good pay… Maybe I’d consider it. I envisioned dark-mustachioed Bedoins galumphing across the desert on camels. Probably not.

Mr. Chandler courted me online, showing far more interest than any other school director. I’m good at responding to emails, but he was better. I had an encouraging reply within minutes of every message I sent. Koç looked intriguing. I pored through the information he sent, wondering whether I was willing to give up my dream of teaching in Barcelona, Salzburg, or Paris. Barcelona with its captivating Gaudi buildings, Salzburg with its Blue Danube and snow-capped Alps, or Paris’s cobbled streets with the Musé d’Dorsay and street cafes. I had a love affair with Europe, but this guy seemed to think I was perfect for his school. I read his interest as genuine and heartfelt. I think it was. Chandler is an intuitive reader of people, and he knows what he wants.

Finally in February of 2005 I was flying through a snowstorm to the University of Northern Iowa International Recruiting Fair in Waterloo, Iowa. Waterloo is far from picturesque, especially in a February freeze, but the conference was incredible. Over 600 teachers and 160 school directors filled the convention center on that first day. As I perused  my information (reams of school descriptions) and sifted through the latest openings, my mind raced. What did I want? Would I get a job? What if I didn’t? Every teacher had a folder filled with notes from school directors, invitations for interviews, etc. I decided to pass on the Koç position because of a reference to rote learning; I wouldn’t compromise my teaching philosophy with drills and memorization. Not for two whole years. And why would I want to live in a country that bordered Iraq? Like it or not, America was at war there. And then there was the Islam thing. I sure didn’t want to wear a scarf. Yup, I’d avoid the Mid-east. It would be good old Western Europe for me! Barcelona or Paris would be just fine, thank you.

I found John Chandler on the arena floor at his school’s table. He was distinguished—white-haired and thin-lipped. I introduced myself and apologetically cancelled my interview. He nodded and smiled knowingly. “Can I ask why?”

“It’s the rote learning,” I said. “I’m a hands-on teacher; I prefer active learning and inquiry in my classroom.” (I wasn’t going to mention the Islamic thing—probably politically incorrect.)

“That’s exactly why we’re interested in you,” he said. “You must have misunderstood. We frown on rote learning. That information was about the dersani classes the seniors attend after school and weekends. Our system is dedicated to stimulating and involving them. You might want to reconsider. Why not take a look at Koç?”

Well, I did. I took a good look, and I liked what I saw. After two interviews with John Chandler and incoming director, Tony Paulus, I was offered a position. I was also offered three other positions.

I chatted with experienced international teachers about my options. “You can’t pass up an opportunity to teach in Istanbul,” one said. “It’s a cultural mecca,” said another. “If I could get a job in Istanbul, I’d go yesterday,” one man told me. Another teacher was familiar with the Koc School and spoke highly of it. Hmmm…

I called Luana Brandt, a former teaching compatriot who had traveled throughout Europe and Asia. I thought she might lend another perspective. When I shared my four options, she responded immediately. “Istanbul. No question.” That clinched it. Everyone had pointed the way, and I would be a fool not to follow.

Turkey it would be.