The sixth annual Old Fogies Lake Superior Kayak Trip challenged us—at least a bit. We had a few handicaps this year: I was just over a month beyond foot surgery, Dick has a bum hip, and Annie has temperamental elbows and shoulders (due to an oversized kayak). Jini and Mike seemed to be in pretty good shape, but there’s always the spectre of arthritis haunting us. Could we actually BE Old Fogies? We range from 59 to 69. Hmmm…
Because we couldn’t get out until September, we decided to return to the relatively protected area of the Apostles, hoping to visit the islands we’d missed on our first trip. The weather had been stellar for weeks before our trip, so we had high hopes it would continue. 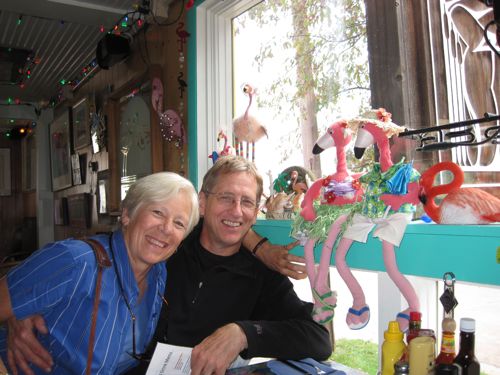 Me and Mike and Maggie’s flamingoes
Late Thursday afternoon (after a DELICIOUS lunch in Bayfield at Maggie’s Restaurant–decorated to the hilt with flamingoes) we pulled into the Little Sand Bay, our destination. We hauled our kayaks down to the beach and loaded untold amounts of gear into them, a process called “staging.” According to Mike, we finished in record time. As we cast off from shore, we wondered about the six men who’d loaded their kayaks up on the lawn near their cars. Though it’s a chore to haul gear down to the beach, it’s FAR more difficult to carry 150+ pound loaded kayaks. To each his own. 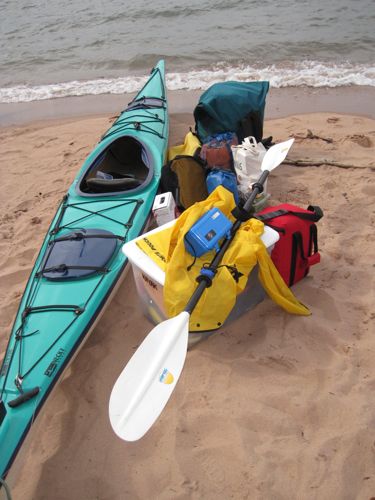 My kayak and the gear that will go into it.

We donned our rain gear, and a mist began to fall as we paddled the six+ miles to our campsite. The guys pushed on ahead while Annie, Jini, and I took our time crossing, ecstatic with the glee of a new adventure. The mist abated as we approached Sand Island, where we were rewarded with shoreline sea caves. It’s virtually impossible to pass a sea cave without exploring; we took our sweet time enjoying the echoes, splooshes, and challenges of paddling through them. 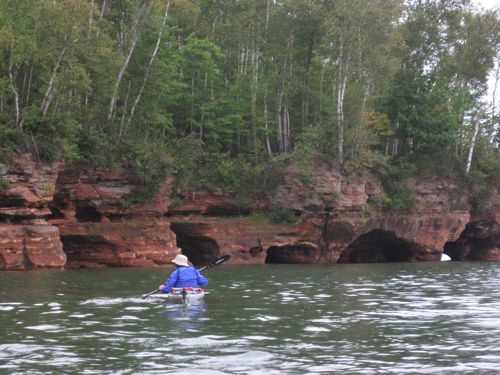 Our first trial was paddling around the northerly point of the island into the wind, where crosswinds created a jumble of multi-directional waves, peaking erratically. Challenging, but VERY fun! We had to focus on the waves, so we could only steal quick glances at the picturesque Sand Island Lighthouse perched high on the point. 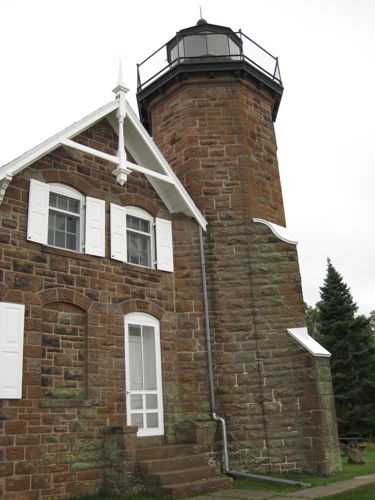 FINALLY! We reached our campsite before dark, well aware that it might be our home for the next few nights. We’d been warned of high winds to come and expected to be windbound. Luckily, both Mike and Dick have weather radios, and we did daily checks on weather and small-craft warnings. Our campsite was in a protected cove where we couldn’t really see the waves, but we were later told that ten-foot waves were reported on Friday.

Needless to say, we spent two nights on Sand Island. To fill our non-paddling days, we hiked. Down the beach, over to the lighthouse, and around the island (at least the others did—my foot wasn’t up to more than a few kilometers of hiking at a stretch, so I only walked the beach and to the lighthouse). 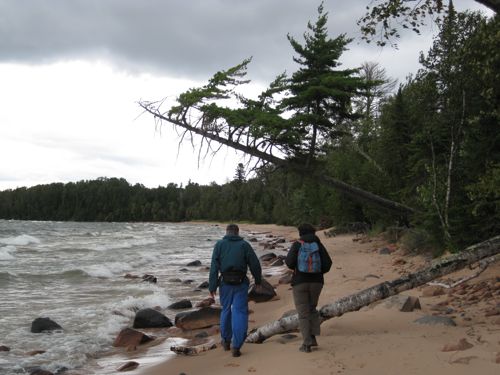 Saturday the sun was high and the waves were, too. We were disappointed, but our radio informed us that the waves would abate later in the afternoon. We decided to enjoy the sunshine and then pack up our gear. We would have our big evening meal at noon, then be ready to cast off when things looked safe. I think we launched about 2:00 for a 14-mile paddle to Rocky Island. The good news is that the wind was with us, though we felt a bit more like surfers than kayakers. 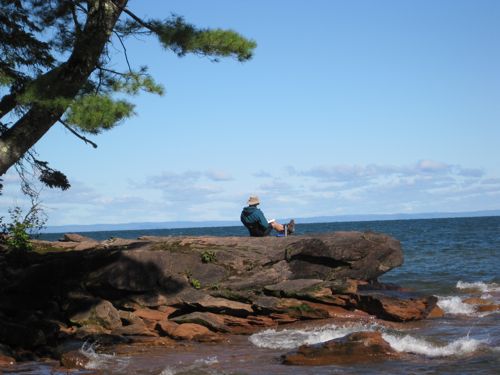 We were totally exhausted when we rounded the sandy point to our destination (leeward, thank goodness) on Rocky. Lo and behold, there were no less than 12 sailboats moored just down from the first campsite. 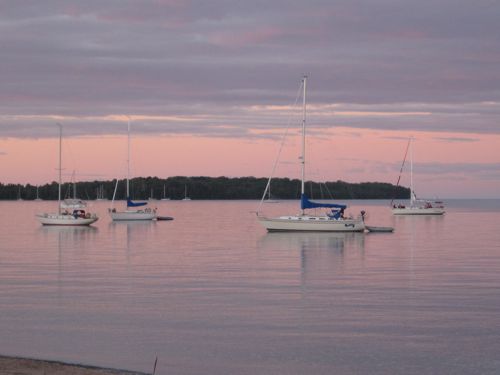 Sunset from our campsite on Rocky Island

We had no reservation there, but we assumed that since it was 6:00 p.m. we could take any available campsite. The first site was located just off the beach, it was close, and it had great tent sites. We heaved a great sigh of relief, hauled our food to the bear box, unloaded our lunch packs, and dove in. YUM! After imbibing in both food and drink, we got the tents up just before the sun set.

Imagine our surprise when two shadows emerged from the dark just offshore, paddling our way. OOPS!!! They had, indeed, reserved this campsite, but they kindly offered to camp on the beach nearby. “Don’t worry. We’ll just wait for the ranger to leave. We prefer the beach anyway.” This considerate pair of brothers from Chicago refused our offer to join us in our site and waited until the ranger’s boat left the cove. Whew! Were we lucky! They could have made a real stink about us taking the site, but they WERE really late. 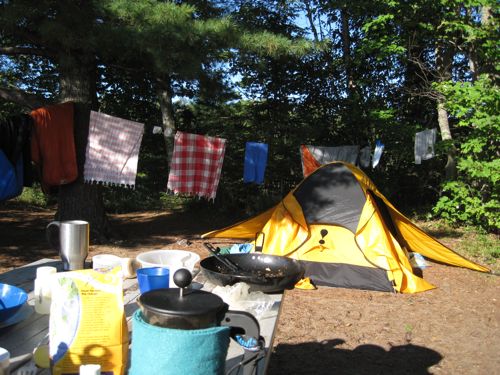 The morning brought calm waters. Hooray! We indulged in a big breakfast of bran muffin/pancakes, then walked the beach, watching the birds and exploring the island. Mike took off on a 20-mile trek to North Twin and Outer Island, while the rest of us lollygagged before heading out on the short 6-mile paddle to Cat Island. 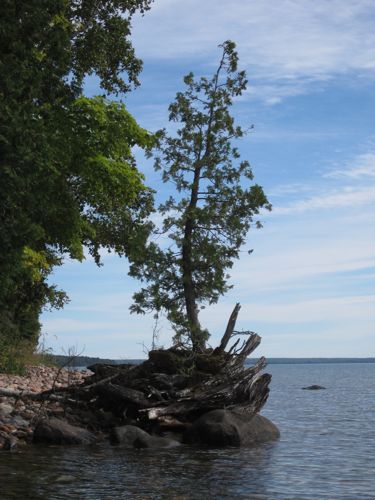 A fascinating lone cedar along the shore of South Twin, imagine two nearby eagles shrilling to each other…

Our campsite on Cat had a beautiful sand beach, but the cooking area and tent sites were high up on the hill in the woods. No picnic table—bummer. We had to fix food on top of the rusty old bear box. Halfway up the hill was a moldering toilet–our joke for the day. It was our first real latrine—a system of composting where we’d toss in a handful of “forest duff” after each use. The base of it was open, though screened from insects and bears, and believe it or not, it didn’t stink. Good thing. 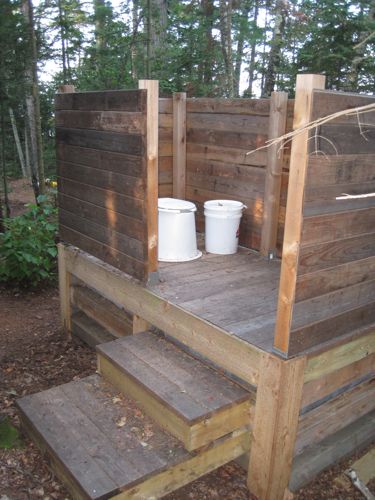 Just as we were wondering how late Mike would be, he pulled up on the beach. He’d said he’d be back by 6:00, and it was 6:05. Of course, we gave him grief for being late. Why not? We were joined by a few sailboats moored off the beach (It was Labor Day weekend), and they made a point of visiting the famous toilet. Three of the boats were peopled by Single Christians who were there for some serious socializing. They couldn’t outdo us, though—in fact, one of them walked over to ask what we’d been laughing about so hysterically. “Inside joke,” Dick explained. We felt it a bit too ribald for single Christians (something about Dick’s little orange hot-dog tent). Actually, we dissolve into hysterical laughter at least daily. This trip it was often over the Dick and Mike Show: two drunks at a Wisconsin bar. Guffaw.
Dick and I sat up with the trip’s first campfire until late that night–nearly 9:30 (we were usually in our tents around 8:00). 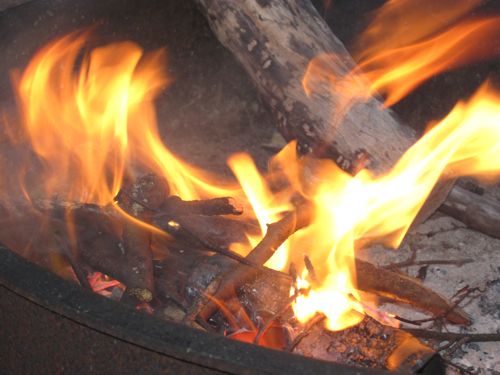 Dick roused us all at 6:30 with a report that we needed to race through breakfast and get on the water, as the waves were going to increase to 4-6 feet by afternoon. ARAUGHHH!!! Man, did we MOVE! Cold breakfast (thanks, Jini), pack up, and off we flew. The wind was behind us, and the waves were already 2-3 feet high, amazing after the calm of the previous day.
We tried to stay together, but it wasn’t easy, especially since Jini and I decided to break the trip up with a short stop to investigate a STELLAR campsite on the south tip of Ironwood Island. The waves grew, and once we were closer to each other, we would lose sight of everything but heads–big waves. Mike was busy surfing them, smart-alec. He set a plan of action for landing in the high waves at our Oak Island campsite. He would go in first, then each of us in turn would ride a wave onto the sand, hop quickly out of the kayak, and those on the beach would pull it up before the next wave crashed. Annie made the mistake of standing up IN her kayak and was thrown off balance when they yanked her kayak up. Oops! No injuries–just laughter. 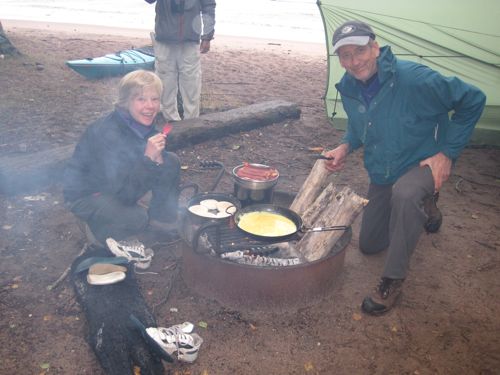 Annie and Mike prepare a delectable Breakfast for us.

It was a nice campsite, except for the wind, which pounded us head-on. I now understand how women on the prairie would go crazy from the wind. We got rid of our wet clothes, bundled up, then sat in the sun to enjoy a late lunch. Once again, we were totally exhausted. According to Dick’s GPS, we had done 8 miles in two hours with a top speed of over six miles an hour. Thank-you, Wind! 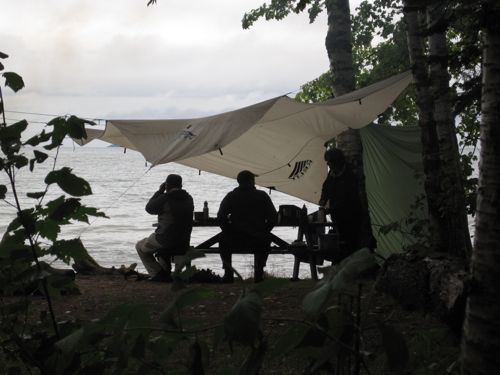 Behind the tarps on Oak Island
Jini and I pitched our tent in a quiet clearing back near the loo (wind blew away any odors), and by the second night, Annie and Mike joined us back there. We set up a rain tarp and a wind tarp, and there was a small area behind them where the wind was just tolerable. It was better to be back in the woods. We all headed up to the Overlook during the afternoon, marveling at the unique forest of hemlocks, maples, and birch. 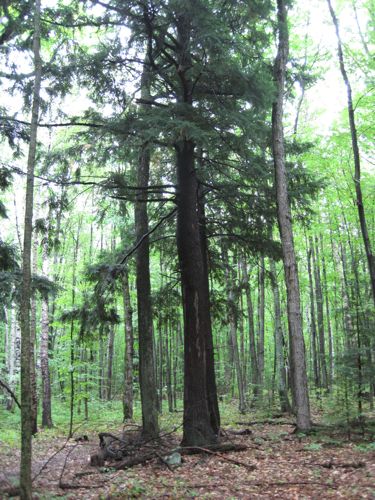 “THIS is the forest primeval. The murmuring pines and the hemlocks,
Bearded with moss, and in garments green, indistinct in the twilight,
Stand like Druids of eld, with voices sad and prophetic,
Stand like harpers hoar, with beards that rest on their bosoms”

-from Evangeline, by Henry Wadsworth Longfellow

Mushrooms abounded as well–it was gorgeous. Later we did our share of reading and napping in hammocks and tents. Even back in the woods, though, the chilling wind shortened our hammock sojourns. 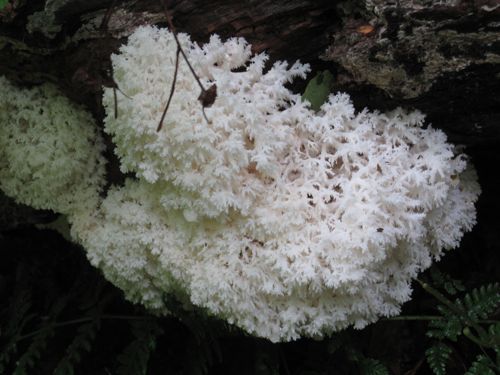 A coral mushroom, growing on a downed tree 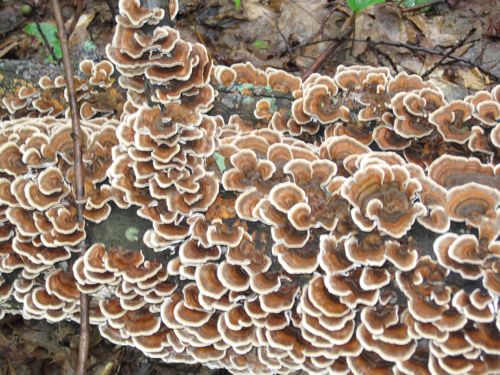 Flowery-looking fungus on a downed tree

We knew we’d be windbound another night, so we took our time with cocktail hour and meals—always with the added treat of the Dick and Mike show. What a pair!
We’d hoped the wind would die down during the night on Wednesday, but the gales were still blasting us. The waves were manageable, though, and we were tired of hanging out at Oak. We packed up and headed off for Raspberry Island, hoping to be rewarded with a wind-free beach. It was a rough paddle into the wind, but we finally made it. And it was perfect. Annie and I washed our hair, letting it dry in the windless sunshine. HOORAY!!! We relaxed over lunch, napped, and read on the beach, then hiked through the woods to the lighthouse on the north end of the island. Dick and Mike enjoyed a rollicking game of croquet while Jini and I listened to the tales of our young ranger guide. He finally explained, too, that the lush Canadian yew on the island was due to the dearth of deer on Raspberry. It had been mere ground cover on Sand Island, where there’s a big deer herd. Apparently it’s pretty delicious. I’ll pass. 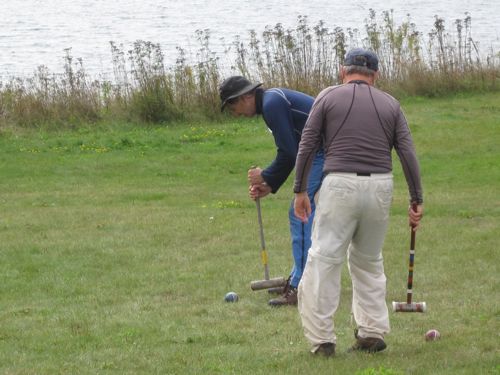 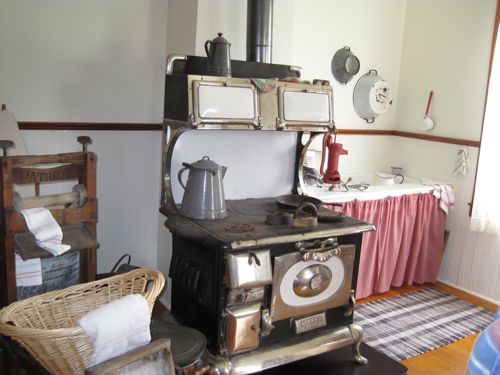 Raspberry Lighthouse Kitchen, circa 1920
We tore ourselves away from the island around 2:00, and it took us a few more hours to paddle the five additional miles to our landing. The wind gradually abated, and we were able to chat and explore the shoreline as we approached our final destination on Little Sand Bay. Whew! 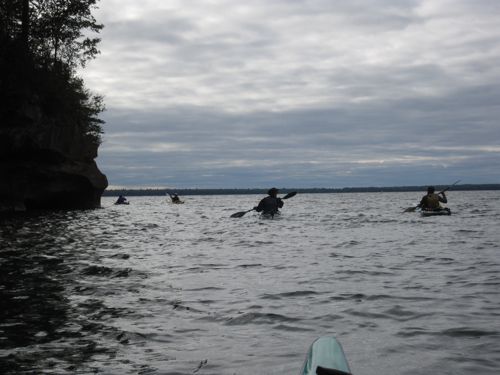 Late afternoon, paddling back to Little Sand Bay
As we drove home, the sun set over a glass-smooth Lake Superior. Now how did THAT happen? We later learned that a kayaker had drowned near Sand Island the next day. I’m glad we’re cautious. Old Fogies are. 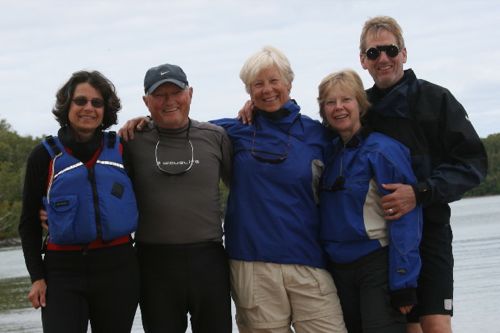