I’m haunted by news of protests in Istanbul, praying that this upheaval is followed by another of the governing party in the next election. Under the rule of the AKP (an Islamist-leaning party), the country is moving away from the secular democracy established by Ataturk in 1923. In recent years more than 180 military leaders have been jailed by this government, along with more journalists than in any other country in the world (even China). What kind of democracy is this? Now the government is tearing down one of the city’s only parks to build a mall and an Ottoman barracks as a museum. WHAT??? 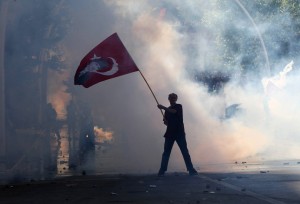 Photo of protester from Boston.com

My former Koç student, Cansu Ozgul, explains the situation succinctly and effectively. Kudos to her efforts—I’m doing my best to pass it on.

We would like to call your attention to the recent turmoils in Turkey, because we believe it pertinent to all those striving to live in peace and with dignity, and because we really need your help.

Right now, in Turkey, innocent people practicing their democratic right to peaceful protest are suffering at the hands of government organized police brutality. This urgent issue, which threatens the very notions of natural and democratic human rights, is one of universal relevance. And it must be affirmed, in front of the whole world, that government oppression will never be tolerated – not in Turkey, not anywhere else; not now, not ever! And this is why we’re reaching out to you, calling you to action.

A peaceful sit-in in Istanbul’s Taksim Square in protest of the attempted demolition of a beautiful public park to instead erect a commercial mall, faced violent police crackdown on May 31st. The brutality began with the police burning protesters’ tents, and continued to escalate with the police making heavy use of water cannons, throwing excessive tear gas at groups, and shooting rubber bullets targeted directly at people. There are even reports that the police have now started using the infamous chemical Agent Orange, once a war weapon, against its own people. Hundreds of serious injuries, as well as fatalities, have resulted by this unprovoked and disproportionate use of police force. 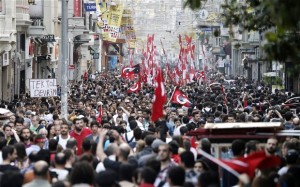 Photo of protest from Boston.com

What began as a peaceful environmental protest has now grown into an outlet for the Turkish people’s grievances against an authoritarian regime. The protesters have remained peaceful, but police brutality has been increasing steadily. We fear for the safety of our families and friends at the hands of such relentlessly excessive police force. We further worry that the government has not only remained silent in the face of this violent injustice, but has even stood behind it.
The local mainstream media has effectively been censored. The potential of trouble if they cover events that shed an unflattering light on the current government seems to have deterred the media from providing informative, objective and comprehensive coverage. Given that thus the Turkish people are left in the dark with very little recourse, we must call on the rest of the world to pay attention to our plight and stand in solidarity with us, with all those fighting for democracy.

Governments all across the world, international media, our fellow humans: We need your support. And it is our ultimate hope that with international encouragement, the Turkish government will finally listen and respond to the peaceful, rightful voice of its own people. It is our hope that those responsible for allowing this massive violence against innocents to perpetuate, such as Prime Minister Recep Tayyip Erdogan, resign their posts. And we need international support to get our voices heard. 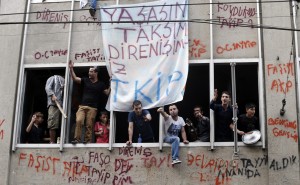 Photo of protesters from Boston.com

What you can do: Get informed and spread the word. Some videos and news articles are attached below, which you can start sharing via Twitter and Facebook. We are counting on the intellectual prowess and human sensitivity of our amazing friends. Please stand with us, please speak up with us.

With wishes that peace, freedom and kindness prevail everywhere, always,