If your friend was driving to a neighboring country, what would you do? Hitchhike, of course! Dee and I cheerfully hopped into David’s aging Fiat to accompany him on his long trek to a Bulgarian wedding. We weren’t invited to the wedding, but we know how to make the most of exploring.

Once we emerged from the mire of Istanbul traffic, it was smooth sailing—to the border, at least (300 K). The Bulgarian border crossing isn’t exactly renowned for swiftness. In fact, David says he’s often spent hours there, held up by lines and paperwork. Unlike our Canadian border crossing at home, we stopped at no less than six (was it 7?) checkpoints along the road on both sides of the border. David’s car papers were scrutinized as though he were a fugitive from justice, and believe me, his water-damaged passport didn’t help either (a fly fishing mishap). Somehow we made it through all those stops in just over an hour, record time according to David. 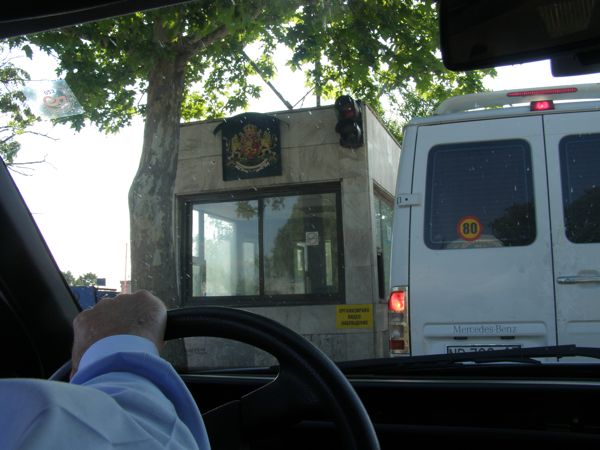 The LAST of many checkpoints to Bulgaria

In spite of horrific roads, we arrived in Sofia around 11:00, passing “ladies of the night” as we drove the ring road to a friend’s house. Apparently these entrepreneurs service their clients on the spot—back seat bargains, I guess. Scary. Bulgaria is DEFINITELY not Turkey. 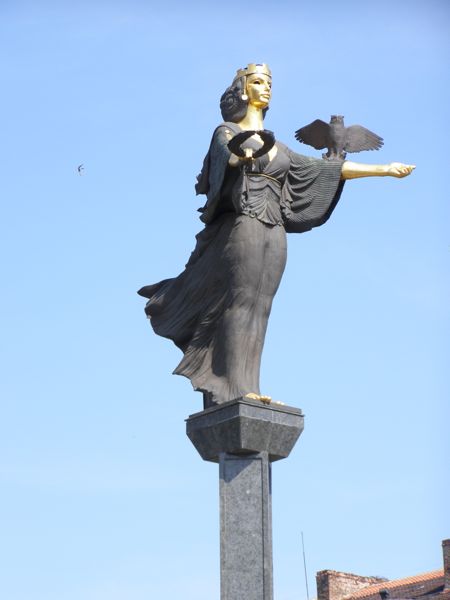 We were finally delivered to our lovely boutique hotel around 2AM, where we caught some serious Z’s. Bird songs and sunshine woke us early, though, and we were antsy to get out to explore the city. We had breakfast outside, a grilled sandwich of sausage, cheese, and cucumbers. And they even have good coffee in Bulgaria—imagine that. David and his friend would meet us later, so we were on our own. Dee suggested we walk the mile or so to the historical area of the city, and I was glad. Not only did we need the exercise, but every few blocks brought a new discovery.
First we encountered the street market, where one booth sold local wine straight from huge wooden barrels. Either bring your own jug or drink from the spigot, I guess. 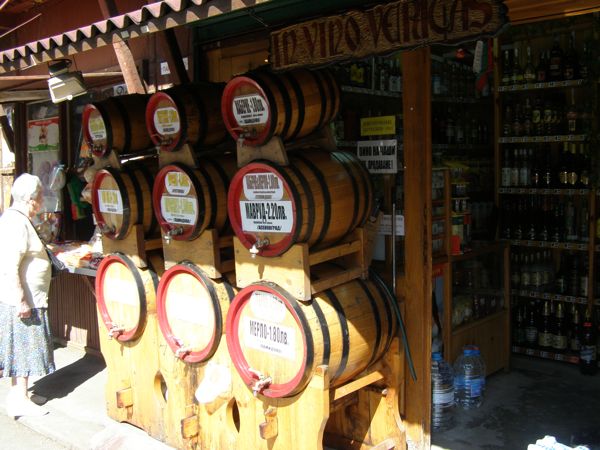 This is TRULY B.Y.O.B. wine sales.

Just around the corner we discovered Sofia’s huge synagogue with its intricately sculpted façade. 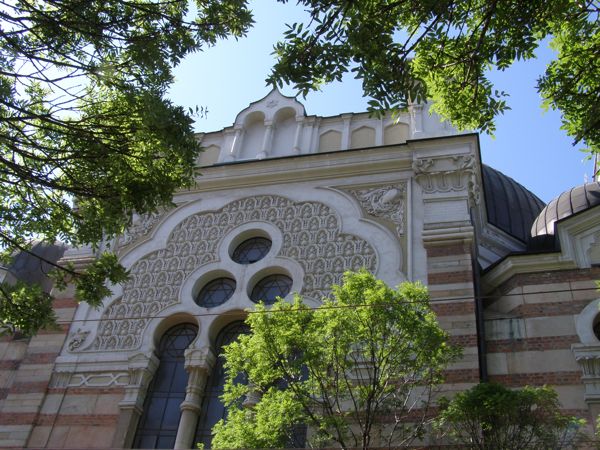 A block further we found the Banya Bashi Mosque, a relic from the Ottoman era. Because the Turks controlled Bulgaria for over 400 years, we noticed many similarities in food, architecture, and language, but only one mosque. Behind it was a fountain, and beyond that an entrancing building under renovation, once the city’s central baths. It had intricate ceramic borders along its cornices and windows which were more than charming. 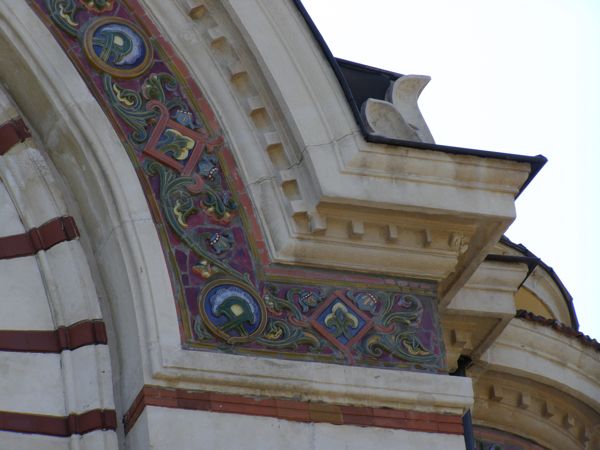 After snapping eight million photos, we headed off again towards the city center, only to be stopped by scores of people heading into a low-walled area carrying water jugs of all shapes and sizes. Hmmm… In the middle of Sofia there’s a myriad of little individual fountains, which we assumed were mineral water. I waited my turn at one of them and took a sip—HOT mineral water! Apparently Sofia, which is located at the foot of a mountain, was initially settled because of these hot springs, a clear explanation for the nearby public bath and mosque. 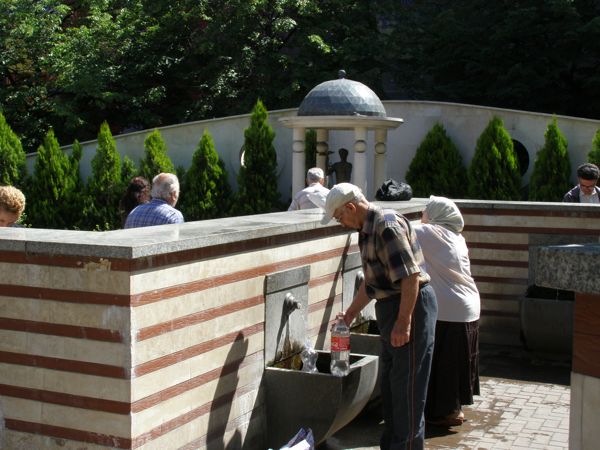 More photos, then off again to explore the city’s wonders: the Alexander Nevsky Cathedral, which dominates the city from its central plaza; the Church of St. Sofia (6th century) which gave the city its name; and the picturesque Russian Church of St. Nicholas the Miracle-Maker, built in the early 1900’s. 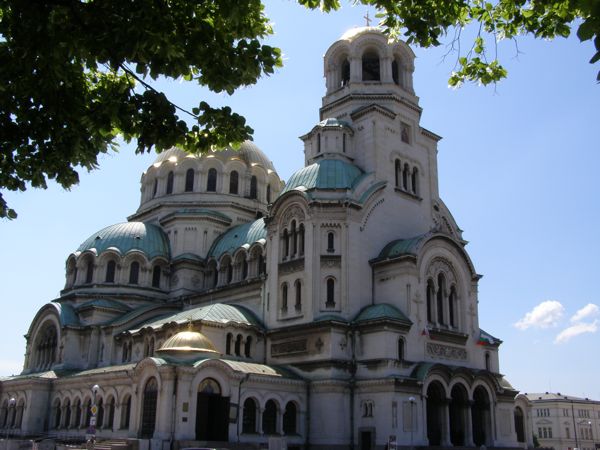 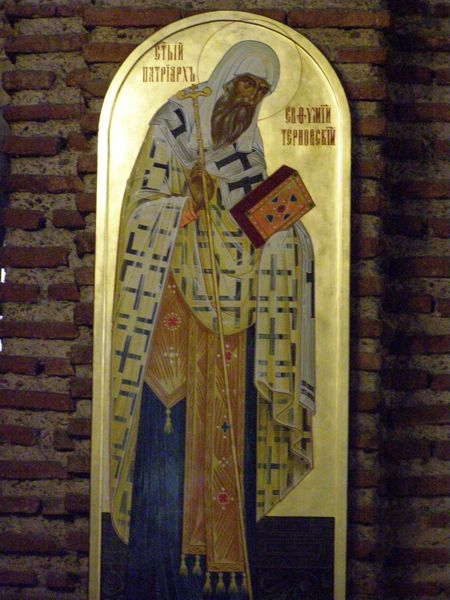 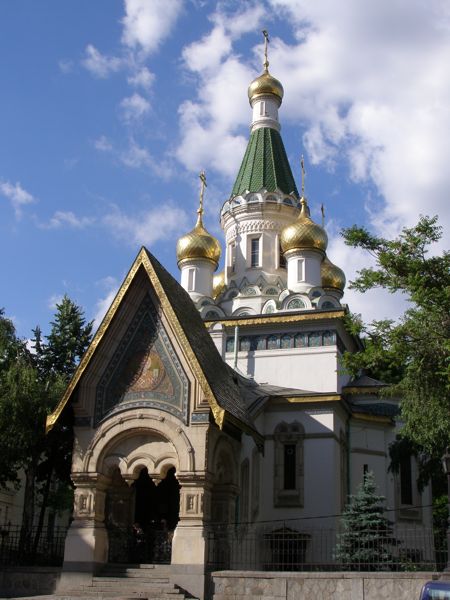 The miraculous Russian Church of St. Nicholas the Miracle-Maker

We explored a number of vendors’ booths in a nearby park, where merchandise included religious icons and antiques. Both were interesting, and the recent communist rule was evident in the selection. Heavy sculptures nearby depicted the angst of the country’s many wars and communist domination. (The city was bombed by the Allies in 1943 and 1944—that would be us.)

Trying to choose an icon (actually, there’s one in my bag, bought at St. Sofia’s) 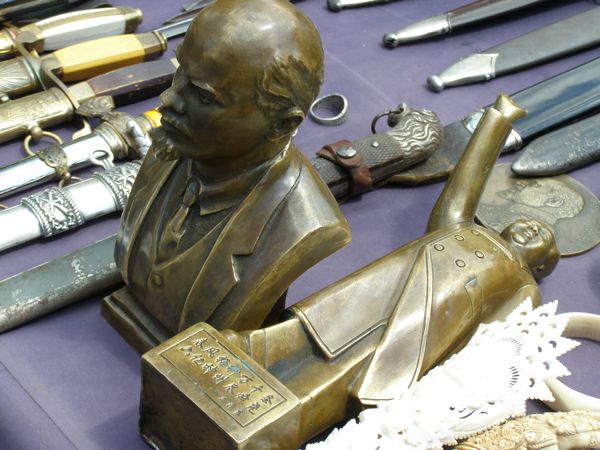 We met David and his friend Nia for lunch and a bit more sightseeing, and introduced us to the traditions of Bulgarian proms. High school seniors celebrate graduation with a gala prom, but before and after the dance they terrorize the city (somewhat) by driving around, yelling, blowing whistles, and just making spectacles of themselves. Everyone seems to accept this behavior, which goes on and on and on and… 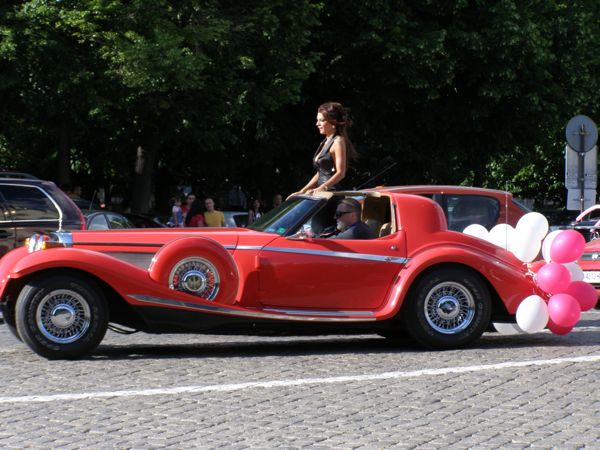 We visited the National Gallery (in a palace screaming for renovation), revived ourselves with a cup of coffee, then Dee and I headed back to our hotel. We settled happily on our little balcony aerie with our feet up, sipping cool wine and enjoying the surrounding greenery. We all met again in town for dinner, then tried a taste of night life. We propped our eyelids up until the band arrived at 12:30, but when they hadn’t started playing at 1:00, we gave up. Sigh…
Sunday we explored a new area of the city, catching a holiday parade. Instead of Memorial Day, the Bulgarians celebrate Cyrillic Alphabet Day on May 24th.  It’s actually devoted to two saints, St. Cyril and St. Methodius, the alphabet’s creators. 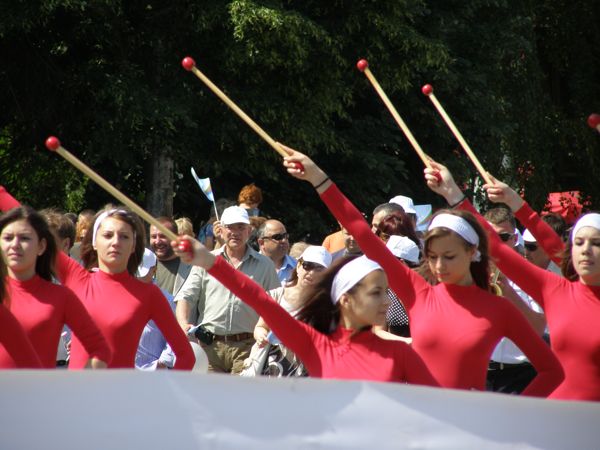 After watching the parade for a while, we visited the 14th century Church of St. Petka, where we sat in on (actually, stood in on) a service in its tiny sanctuary. The incense-laden nave held us, 7 local attendees, and a gilt-garbed priest who officiated the service holding a gleaming golden cross. 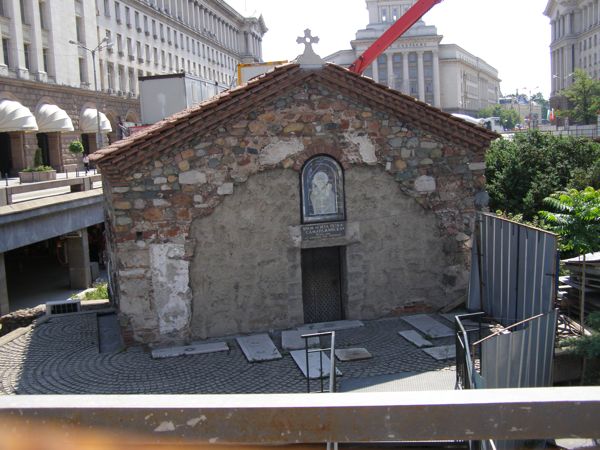 After that we explored St. Nedelya Church, which was completely reconstructed after a 1925 bombing. There we happened on a baptism, complete with the strains of a choir from a distant loft. 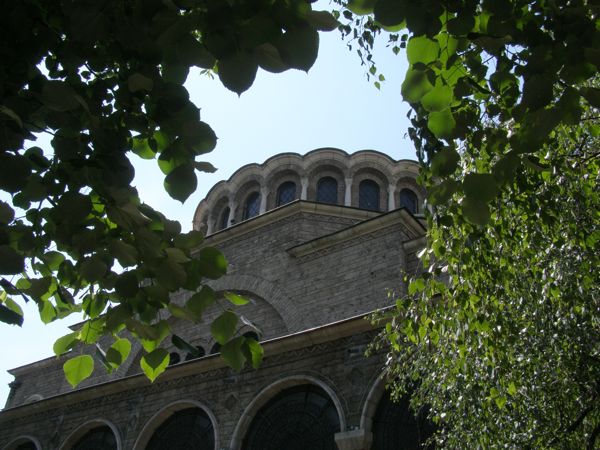 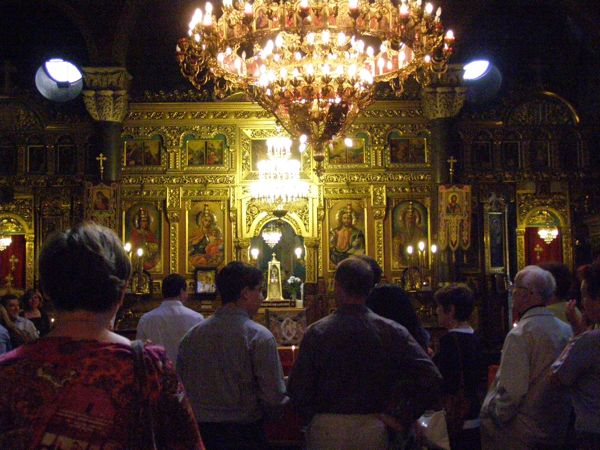 One more stop at the 4th century Church of St. George finished our morning explorations. After that we met Nia at the Nevsky Cathedral, and she drove us up the mountain to see the charming Boyana Church, originally constructed in the 11th century. The church’s interior is painted with incredible frescoes dating back to 1259, including hundreds of human (and heavenly) images in a total of 89 scenes, all executed by one painter and his apprentice. After being selected as a UNESCO World Heritage Site in 1979, the church was closed for over 20 years for renovation, then reopened to the public in 2000. Only 10 people are allowed into the church at a time. 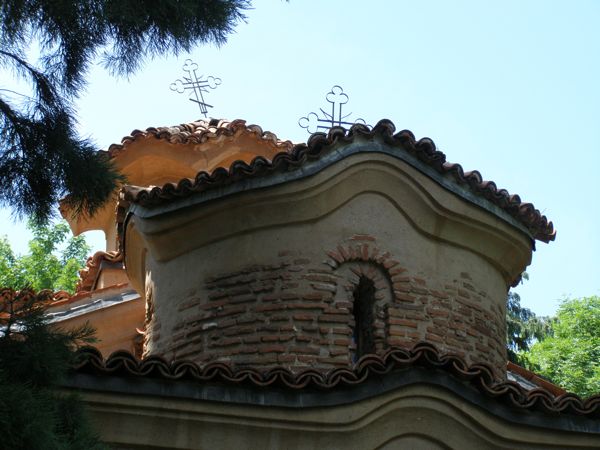 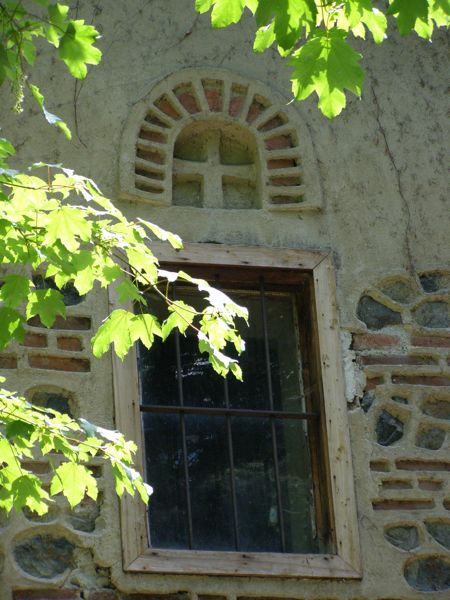 After touring the Boyuna Church, we relaxed over lunch, then visited a grocery store for bacon, ham, cheese, and good wine. Treasures for Turkey. On the way home, we stopped to photograph a small-town steeple appropriated by a stork family. Too cute. 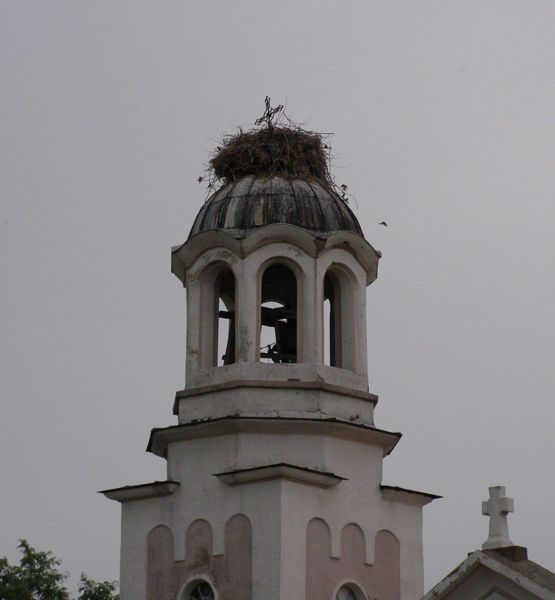 We didn’t get home until nearly 1 A.M. Sunday night, again collapsing into the sack, exhausted. It was a good exhausted, though, after a great weekend. So now I’ve been to Bulgaria.

One thought on “Checking out Sofia”