My Mother’s Day fete was a double-whammy: a birthday party for Carmen and Katrina (Canadians who’ve never lived in Canada). These darling twins are now a whopping FIVE years old! I was tickled to be included in their celebration, probably thanks to my little dog Libby, whom they love dearly.
I haven’t attended a five-year birthday party since my second son turned five, more years ago than I can count (well, maybe not THAT long, but I can hardly remember). I think I made Ross a fish-shaped cake, which apparently makes me the resident cake expert. (Actually, I offered to help.) A fish was a heck of a lot easier than two unicorns, let me tell you. Actually, Sue had done the research and baked and shaped the cakes; all I had to do was the icing: heads, ears, and manes. Sue added eyes and candy bridles, the crowning touch. We both did the sprinkles. 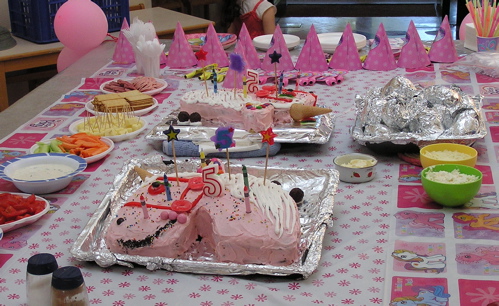 The party was a sweet way to spend Mother’s Day. Serge (the dad) and I delivered the cakes before the children arrived, and I have to admit, I was unprepared for the difference between little boy parties (chaos) and little girl parties (cooperation). I was soon surrounded by princesses, mostly in pink. In fact, as I went through my photos, the overriding theme was clearly pinkness! Pink tablecloths, pink party hats, pink plates and napkins, pink cakes, and of course, pink dresses. Pink, pink, pink. (Faith, though, arrived in a traditional lavender Vietnamese costume, very princess-like.) 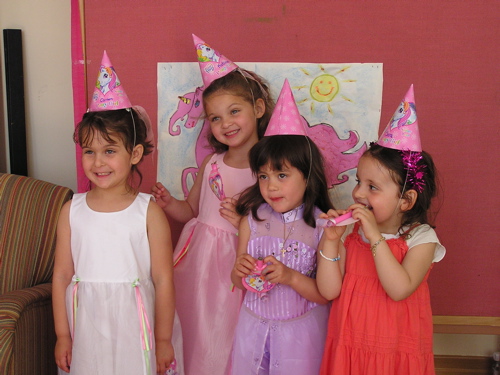 And the Charming Birthday Girls: 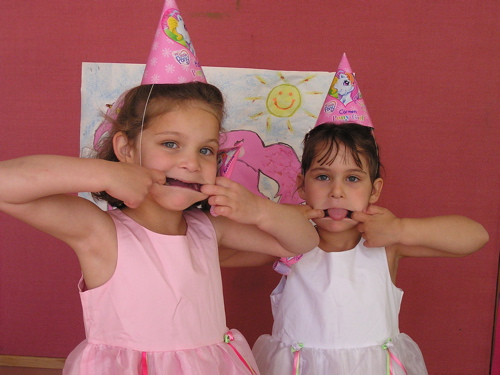 Sue and Serge had planned the classic party, complete with musical chairs and pin the crown on the unicorn (a pink one). The children were darling as they skipped around the one-too-few chairs, and as each was left out, they were cheered and given a small candy bar. No problems with sportsmanship there! 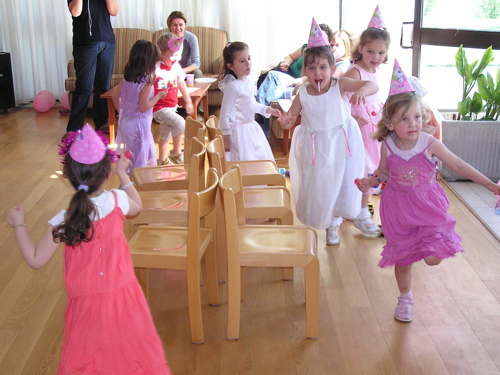 The children decided to run a musical chairs game for the adults, too, which was interesting. Everyone had a blast, but you have to understand that when adults play games, there’s an element of competition involved. We laughed derisively instead of cheering as each person was left out (I was the first), and things went fairly smoothly except for a few lapses in manners. 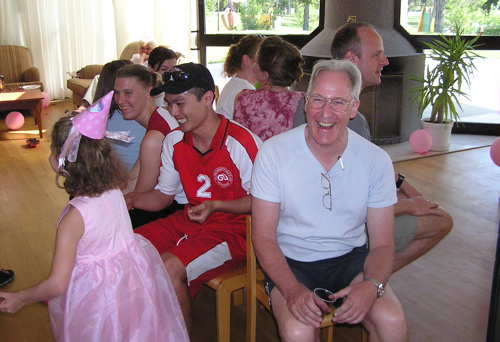 At the end of the game, however, one player pulled a fast one (actually, pulled the last chair out from under his opponent). Oops! Little error in judgment. Luckily, nursery chairs are low to the ground.

Soon Sue gathered the children around the display board for a game of Stick the Crown on the Unicorn (pink, of course). They were wonderful sports, watching each contestant as he or she strove to find the unicorn’s head. Katrina came the closest, but of course, EVERYBODY won. 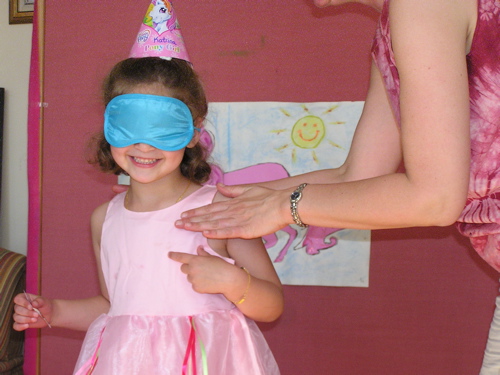 Next came food, blowing out birthday candles, presents, and time on the playground. What a joy it was to share this exciting, sweet event.
(Libby would have loved it, but she wasn’t invited. She doesn’t do pink.)