Talk about a cultural experience! I attended my first soccer match last night, and WHAT a match it was! Exclamation point, exclamation point, exclamation point!
I have students who live for soccer, often launching into chants at the hint of a team name. I asked Murat, my most avid Galatasaray fan, to let me know when there would be a game and how I could buy tickets. (He’s never missed a Galatasaray home game.) His parents generously offered their extra season tickets, which I shared with two fellow teachers. When I asked David, he was hesitant, and Duygu’s first reaction was, “Are you crazy?” Once I explained they were season tickets, though, they were happy to join me for my maiden voyage into Turkish Soccer-dom. 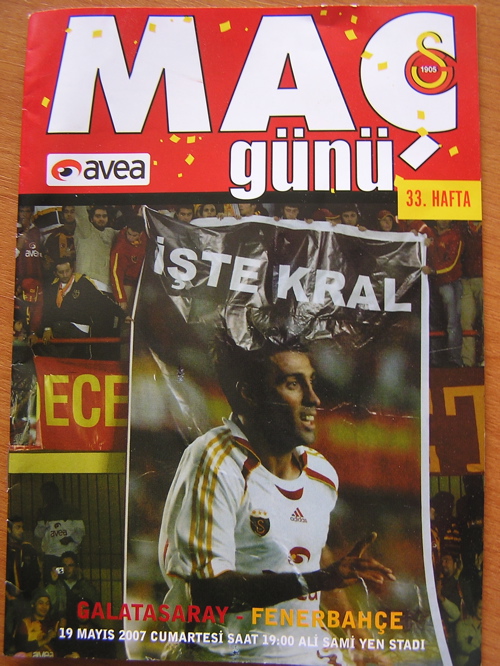 The boom of distant cheers filled the air as we stepped from the metro, though the stadium was blocks away. We went through two stages of security at the stadium, the first an outdoor police gate where we were frisked, and the second an electronic gate and secondary checks with wands. Female guards inspected our bags and grinned at us, saying “Yabanci” (foreigner). They don’t expect problems from foreigners—only Turks. 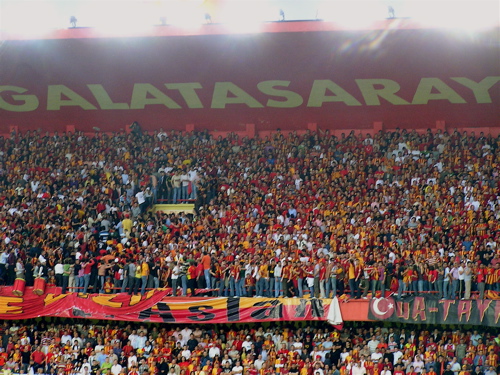 The stands were packed, and I learned that most of the fans had been there for hours, standing on their seats and revving up with chants and cheers (like they needed revving). Our seats (padded) were down near the field near what I would call the 20-yard line. The field was ringed with security.
Galatasaray and Fenerbahçe (Fenner-BAH-chay), both Istanbul teams, are arch-rivals. In the past few years Galatasaray has been stronger, but this year has been Fenerbahçe’s year. They just won the national championship, and this game was a derby match (between rival teams from the same city). Apparently there are similar rivalries in Madrid and Rome, and these derby matches are often hot events (pardon the pun). 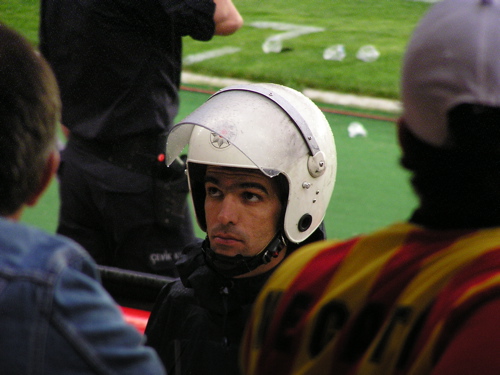 That’s why the field was ringed with police. Most were helmeted, and many had riot shields. It was otherworldly. I noticed immediately that the stands teemed with red and yellow-shirted Galatasaray fans except for a small section on one end reserved for Fenerbahçe fans (yellow and black). Their section was ringed by a 12-foot chain-link fence, and helmeted police surrounded the enclosure three and four deep. There was an empty section of seats to the side of the Fenerbahçe enclosure, and another legion of helmeted police insulated the Galatasary fans in the next section. WOW! 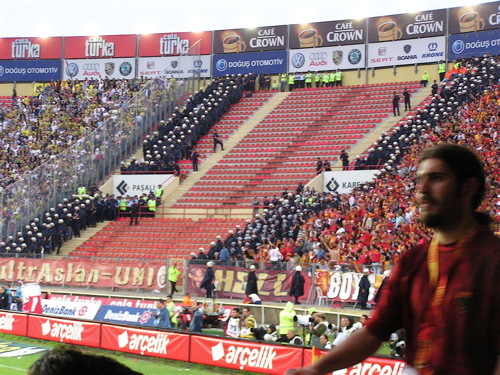 I knew then that my soccer experience would not be as much about the game as about the fans. I was right.
When the game started the field was clear, though within moments people started pelting players with water bottles. Regulations say that the officials will call a game if anything is thrown on the field, but the behavior continued. It wasn’t long before the field was strewn with water containers. 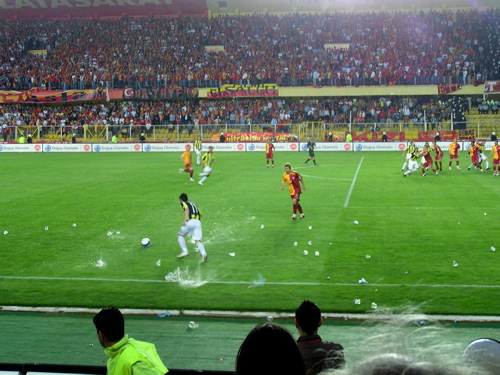 A few minutes into the game, Fenerbahçe scored. The small enclave of yellow and navy blue went wild. Galatasaray chants redoubled, but to no avail. The next goal went to Fenerbahçe. The red and yellow just couldn’t get the ball past Fenerbahçe’s goalie, who made some spectacular saves. I was awed by his kicking, too, nearly the distance of the field every time he thwarted a goal. Galatasaray played with near frenzy to make a goal before the half, but it didn’t happen. 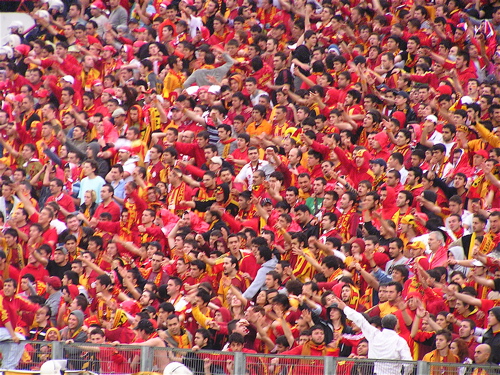 After half-time, police formed a tunnel with their shields to protect the Fenerbahçe players as they reentered the field. I was shocked that they had to provide that kind of protection. After all, it’s only a game (famous last words). 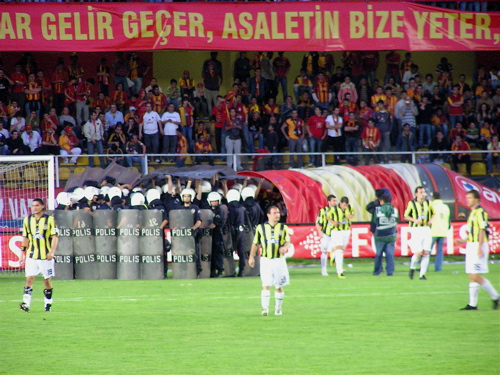 The frenzy in the stands increased. Everyone in the upper decks stood on their seats. More water containers exploded on the field (many on players), and soon a few fans lit flares in the crowded upper balcony stands. I couldn’t believe it! They threw flares onto the field, yet play continued. The air reverberated with chants as the entire arena seemed to explode into flame. There were firecrackers, rockets and flares everywhere, and play stopped, though the clock kept ticking. I was sure they’d call the game.How could officials allow behavior like this? The hazards are horrendous, for both players and fans. 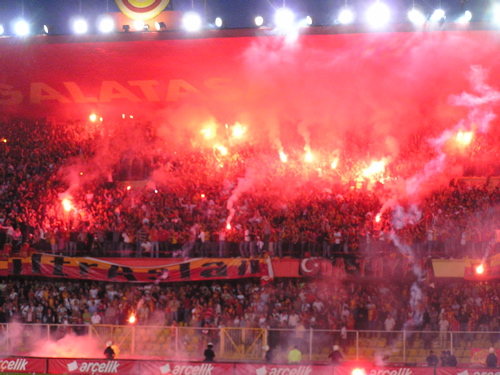 After about ten minutes of this chaos, the smoke lifted, there was a warning on the loudspeaker, and the game continued. Unbelievable. (I later learned that terminating a derby match means a guaranteed riot.) 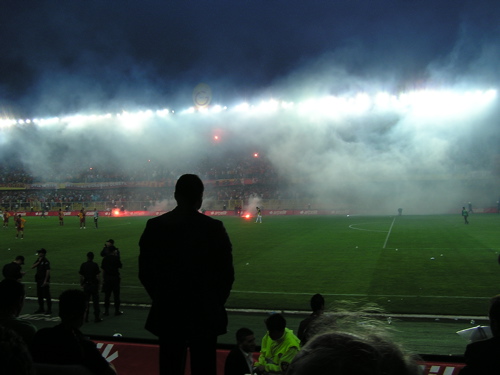 Not long afterwards, all the police ran to one end of the field, and there was another delay. Apparently the referee had been attacked somehow (a water bottle?). Players donned their warm-up suits and kicked balls around the field as the rest of us wondered what was happening. Again, there was a warning that teams and fans would face serious consequences if officials were attacked again. This might mean clearing the stands before the game continued, fines against the team, or the termination of the game.
Wonders never cease. The game continued, and the fans were a little better. Not much, but a little.
Galatasaray finally scored, and the game ended 2-1, a Fenerbahçe win. By the end of the game, people were ripping up their plastic seats and throwing them onto the field. “Seat shrapnel,” , my friend Allana called it. 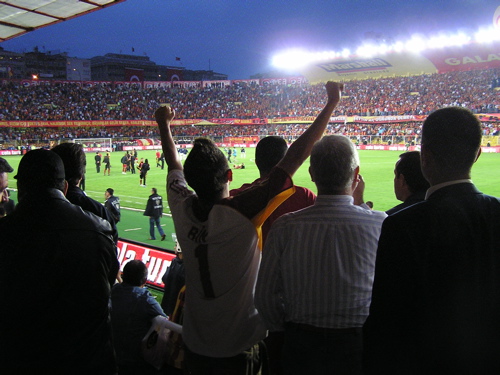 By the time we left, most of the plastic seats were demolished. I hate to think what happened afterwards. The streets outside were lined with riot police, some with shields and plastic armor. “Robocops,” David quipped. It’s an odd feeling to be so guarded—ominous safety, I’d call it.
I’m not sure what makes these fans so crazy. Some have suggested that it’s the hot southern European (and Asian) temperament, while others think the sporting arena is where Turks vent all their pent-up frustrations. Life in Turkey isn’t the easiest. Who knows?
I just know I’m thankful I was able to see a match, and even more thankful that I enjoyed it from the safety of the season-ticket section. I think this may be my first and only Turkish soccer derby match.
I’m no fool.