I was astounded at the many warm thoughts that came my way after my surgery, but even more intrigued by the astute comments about health care in both the U.S. and Turkey. I decided to post them in my blog so you can peruse them as well. Pretty interesting–and they run the gamut.

I’m recuperating well, and I go back to school on Monday, just two weeks after my surgery. Amazing.

Though I think I’ve spent some lazy weeks at home, I haven’t wasted all my time. I’ve finished knitting a sweater and most of a vest, read five books (a few on my Kindle), watched videos of House, The Wire, and Monk (thanks to kind friends), and solved innumerable Sudoku puzzles. I’ve also corrected three sets of papers for school, read and prepared for discussions on Animal Farm, and written an article on Istanbul for U.S. newspapers. Whew! Give a woman a few weeks to herself… 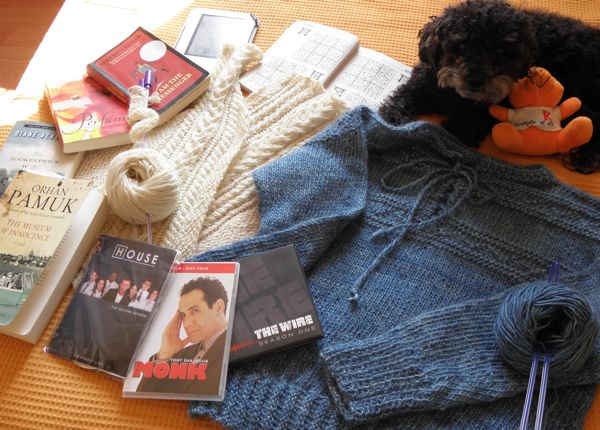 A photo of my tangible Recuperation Accomplishments

…and my sidekick Libby.

FIRST, COMMENTS FROM TEACHERS IN TURKEY:

So glad to hear you’re doing okay. Your stay at the hospital sounds like mine when I had a cyst removed there a few years ago – 5 stars all the way! I was told that flowers weren’t allowed in the rooms because of potential bombs being planted in the flower pots… or was that my strange understanding of their Turkish explanations?! Happy recovery, Ann Marie!

I hope you are mending and feeling better every day.  Sounds like you went through a lot!  Am especially glad your hospital stay was so cheap.  I remember just having to pay for meals, which I think came to around $25, what with the extra meals for my nonexistent guests.  Our health care here (in Mexico) is not nearly as good.  Hence, we hardly ever see doctors.  Every illness has to be paid at around $250 before the insurance kicks in, so if you get a cold and then another in a couple months, it is a separate illness.  So, we often just ask a pharmacist to prescribe something if we are not dying!  And wellness is not covered at all, so if they run tests for something and don’t find it, you pay.  I think  I told you medicine is often expensive.  Sure wonder why meds aren’t high in Turkey, when everything else from foreign countries is?  But that’s a good thing.  Medicine should be cheap.  (One of our first grade classes closed today because of the flu, but we haven’t had any closures in months.)

Happy to hear you made it through ok. Like you, I think I would be scared witless if I had to undergo surgery in Turkey. I had a minor heart glitch- stress and poor diet- and had to go to a hospital here. I was sent to the 5th floor and the elevators weren’t working. That in itself might have been the test. “You made it. You’re ok.”

But your stay doesn’t sound bad at all… if you don’t include the pain, of course. Geçmis olsun.

It’s good to hear from you, though I’m very sorry that the context is that you’re in trouble. I know exactly what you’re going through; it’s nightmarish, especially for such an active person as you and I don’t see how you could tolerate this level of pain and disability for much longer.

I’m always reluctant to advise anyone about anything! But my own personal experience with the American Hospital was outstandingly good. My surgery was very complex and the surgeon – Dr Mehdi Sasani, an Iranian – used techniques which aren’t yet available in the States. It didn’t cost me a cent, as the insurers covered it fully. I haven’t had as much as a twinge of discomfort since the operation – I feel rejuvenated by it,in fact – and I recovered a degree of flexibility which I hadn’t had in years. So I feel that you should go for it; lower back pain is a crucifixion that nobody should have to put up with.

Don’t ever put down Turkish hospital care. You’ll only confim in the minds of those readers who don’t live here that Turkey is backward in this regard.

As our friend [above] told you, his operation was a great success, and a cutting edge (excuse the pun!) technique. Have you forgotten about Leonard [Gilbert’s son]?! Open heart surgery on a two-day old baby! – in Bakırköy. My carpal tunnel release operations, done at Acıbadem hospital. There is no reason, other than personal prejudice, why anyone should need to travel ‘back home’ for an operation. In fact, many of the private hospitals in İstanbul have patients coming in from other countries because of the good value for money they represent.

As for the cheap medication, that’s done by government subsidy. Something that President Obama is trying to do for the US, finally.

I have to share my recent experience last summer with my father after he suffered a major stroke in a hospital in Ohio — and in which he fell out of bed because “they were understaffed and couldn’t didn’t have anyone to sit next to him” even though he was labeled a fall risk. That and my experience three years ago when Orhan [Melissa’s Turkish husband] had a double hernia repair at the American Hospital and Pelin’s experience of having a baby at the American hospital (they even sent a hairdresser to cut and blow dry her hair after the birth!) have all left me feeling less worried about the possibility of ever having a major health problem here in Istanbul instead of the States.  I actually think I might prefer to be here in so many ways.

AND–MY FRIENDS FROM THE U.S.

Ani Pierpont, writer, California
You are [not] missing out on all the fighting here on who justly deserves medical services.  I think the far right would feel that your pain was from some evil thought, thus no help for you.  The far left would pay for all care because no one should profit from someone’s medical misfortune.  We will get some “mashed potato” in the middle that I believe will not help much.  Americans don’t travel to foreign countries enough to know how we are getting screwed on pharmacy costs, not to mention all medical costs; $1.60 there $150 here—ouch.  Single payer is out of the picture, and I think that’s the only way to go.  When I hear how great our medical facilities are [best in the world] I laugh because, as you found out, they’re doing just fine elsewhere, and even better than here in many instances.

A place for the friend to sleep!?!?!  Where!?!? Two years ago my father had heart surgery in San Francisco, and it was an hour and a half to get there each day to help out.  I got him out of bed and moving, then walking around the hospital to build up strength.  Got him extra fruit and food from the cafeteria to make sure his diet was balanced, made sure he sat up in a chair for awhile and then did the breathing exercises so pneumonia wouldn’t set in.  He was out of there in record time to the surprise of all [at 89 only 9 days.]  I was a wreck from the stress, being there all day and the 3 hour commute.

P.S. from Ani on Health Tourism: In today’s on-line Zaman site there is an article on Turkey as a medical destination with 33 hospitals accredited, more than any other nation!  Turkey has a “superior health care infrastructure” it goes on to say, and 200,000 medical tourists come each year!!!!  WOW!!!  They pay 30-80% less than in the U.S.  You found this out the hard way but now your recovery is almost in the ‘rear view mirror.’

Anonymous friend, Grand Marais, Minnesota:
So glad you are mostly out of pain.  Amazing story of their health care system.  Why can’t we get some of that kindness (people able to stay in your room) and the low drug costs.  We think we are so above other cultures in so many ways, it drives me nuts how naive we are.

Actually, I just read in the paper the other day that Minnesota, under Governor Pawlenty’s leadership, is currently ranked 43rd among the states in our nation for overall medical care for our citizens.  That is very alarming, and of course, the poorest among us are also receiving the inferior care.  I’m sure you’re aware of the GAMC debate that continues to go on here.

We, Roger, Badger and I, are so sorry to hear about your back.  So glad you were able to find a doctor that was able to help you so quickly.  We do hope you are back on you feet soon.  We were so impressed with the hospital and drug prices.  This is an American dream.  Do rest and heal quickly.

It was so good to get your e-mail and read your story.  Annie had let me know about your back and need for surgery.  I’m so glad that things went well and that you’re recovering well.  It’s so interesting to me that we ego-centric Americans think we’re the best at everything without giving credit to the skill, training and innovation of other countries.  It seems like you’ve just experienced that first hand.

Your report on the American Hospital and the followup from your friends was fascinating. The NY Times Travel section should run your story. Everyone in this screwed up country of ours that still believes we have the absolute Number One Best health care system in spite of all the evidence to the contrary and who insists on seeing hospitals abroad as hell holes should read your story.

3 thoughts on “Health care comments from Turkey and the U.S.”