First off, a language lesson. The closest city to our campus is Kurtköy, which means “Wolf village.” The o has a sideways colon over it (ö if your computer reads Turkish), so you should purse your lips and push your tongue forward when you say it. To pronounce Kurtköy correctly, then, first say Kurt, then pretend you’re kissing someone (maybe considering a French kiss), and say the last part as though it rhymes with BOY. Enough of that. Suffice it to say that Turkish isn’t all that easy.

Well, the sun FINALLY came out last Friday, nearly all day, as I recall, and my spirits were high. (We’ve had sunshine two days of the last 19, so it was a welcome respite from the rain.) At 2:15 I hopped on the Kurtköy street market bus with a plan to spend about 10 Turkish Lira (around $6) and not bring too much home. Everything here is sold by the kilogram, which is 2.2 pounds, and I often buy too much. I try to limit myself to a half-kilo, and even then I’m ashamed to admit that my delectable veggies are known to rot in the fridge. Sigh… 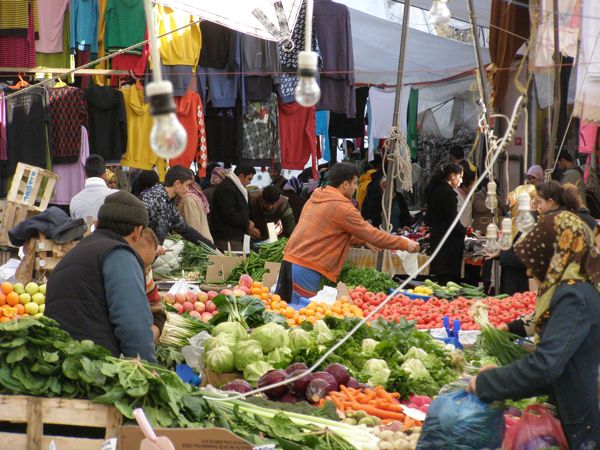 As I stepped under the high-strung tarps of the market street, I was first drawn to a display of fresh strawberries. They were early berries, quite expensive, maybe about 6 or 7 lira/kilo. Not too bad, I guess. As I was considering, the vendor smiled and handed me a çilek. Sweet, firm, and red through the middle. DELICIOUS!  I was in his power. I bought a half kilo of berries and added two pomegranates; my total bill was a whopping 6 lira (about $4). Then off to the veggies. I bought a half-kilo each of carrots (6) and tomatoes (9) for another 4 lira ($2.50). 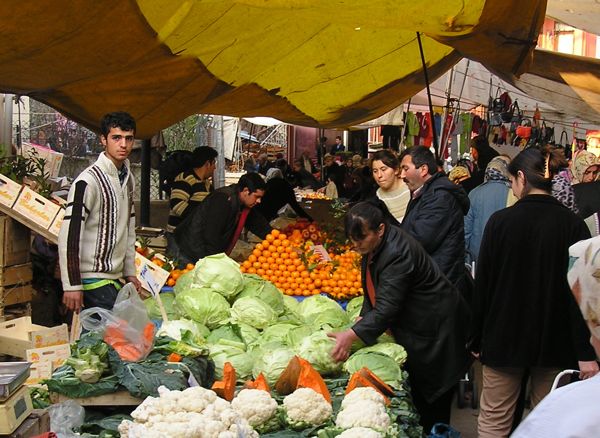 A careful shopper squeezes the cabbages.

A few spices, some Turkish string cheese (better than any you’ve tasted), and six sheets of yufka (a thin phyllo-like pastry) cost me another 4 ytl. I was over my limit. Ah, well. Amazingly, the Turkish words I thought I’d forgotten came back as I needed them. Whew! 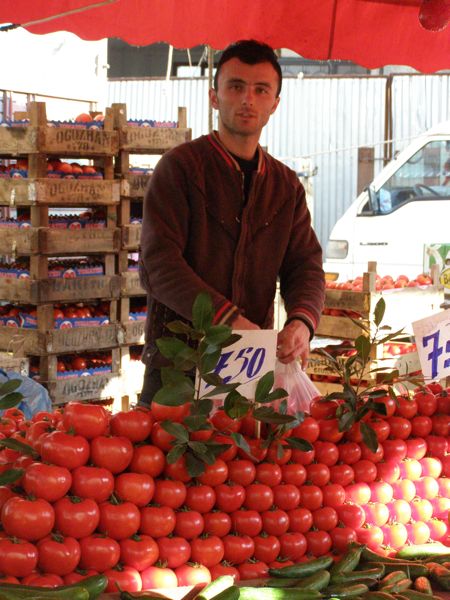 For the next half hour I wandered, reveling in the sights, sounds, and smells of the Friday market. Tarps were strung high over the cobbled streets, protection from both rain and sun. Vendor after vendor called out in sing-song, “Bir Lira! Bir lira!” (one lira), some in deep booming voices, and others in clear, shrill tones as shoppers strolled by. The entire market is a cacophony of voices. It amazes me that the reserved, scarved women can make themselves heard over the din, but somehow they get their shopping done, often bargaining with the vendors. (At these prices, I don’t bargain.) 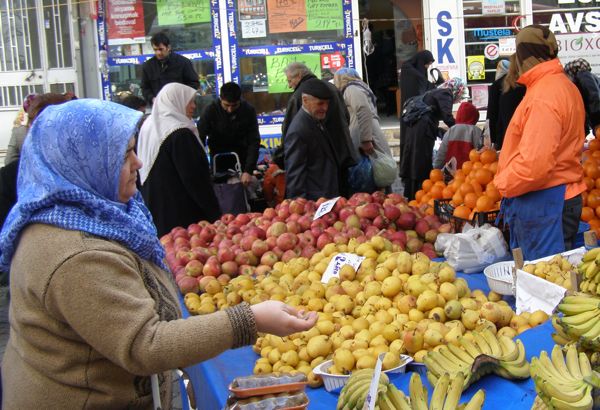 A Friday shopper pays a lira for her bananas.

Many of the shoppers pull little two-wheeled carts, much like a nylon wastebasket on wheels, and occasionally someone rolls by in a wheelchair. The street market is by far the cheapest way to buy produce, sundries, clothing, linens, and even shoes; many Turks can only afford to shop on market day. We teachers go because it offers the most delicious produce, and we just plain love being there. Maybe lots of people feel that way.

Many of the vendors stopped their barking to welcome me (an obvious yabanci—foreigner) to the market, and others invited me to snap their pictures. Could it be my permagrin? Who knows? It’s just all great fun.

And for goodness sake, the SUN was out!

…and the egg vendors… 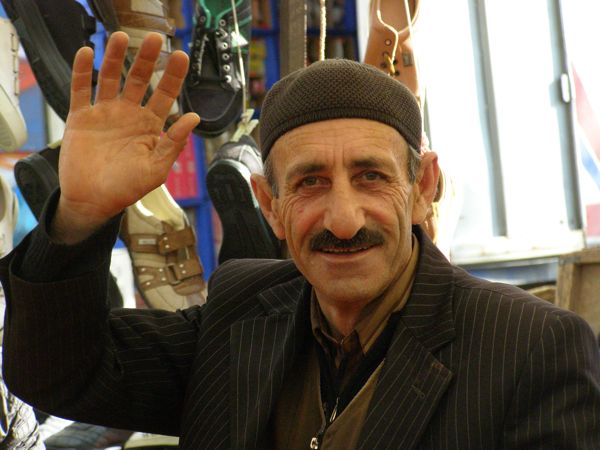 As well as one last cheerful vendor. Guruşuruz! (Goodbye!)