On Saturday afternoon I took Libby for a long walk up the Bosphorus to the Rumeli Castle, one of the most picturesque sites along this historical waterway. The sky was clear and the air brisk, a perfect day for a stroll. It took us about an hour to get there, weaving between hamsi (anchovy) fishermen along the walkway. The screams of gulls, the booming of ship horns, and the sparkling chatter of children punctuated our walk as well. No doubt, I live in the most beautiful section of Istanbul. 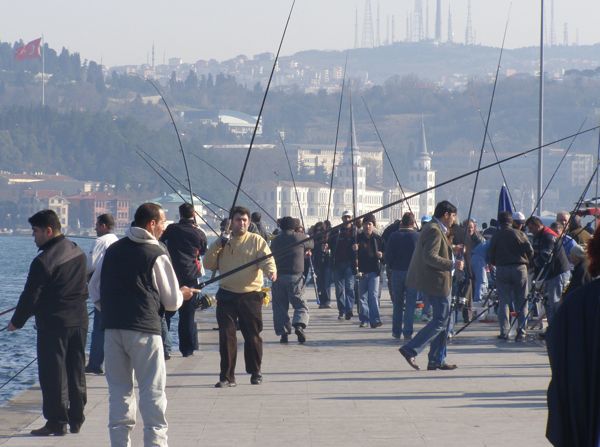 Stretching up the hill from the water’s edge (now from the road’s edge), the castle is an imposing sight from any vantage point. It’s three medeival towers feel more European than Ottoman, though the very name Rumeli means “belonging to Anatolia”—a certain reference to the once-growing Ottoman Empire on the Asian side of the Bosphorus. 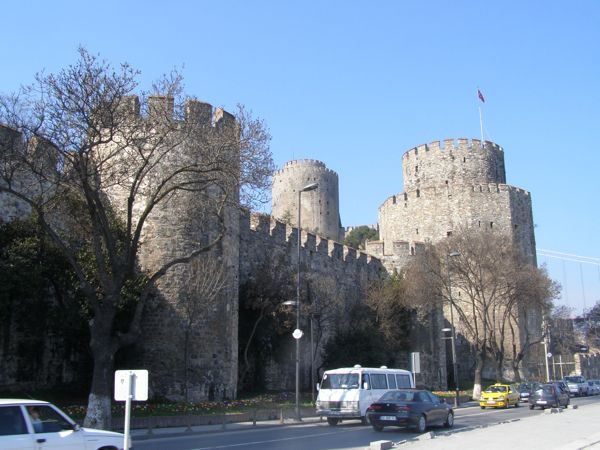 The Rumeli Castle was built by Mehmet the Second, known as Fatih—the Conqueror. It was constructed in the spring and summer of 1452, 40 years before Columbus’s famous voyage across the Atlantic). Built on a European hillside at the narrowest section of the Bosphorus (about 750 yards across), it was built to help the Ottomans conquer Constantinope, now Istanbul. A smaller castle across the water, the Anadolu Hisarı (Anatolian Castle), also helped Mehmet to achieve this ultimate goal of cutting off communication and aid from the Black Sea. Actually, according to historian John Freely, “the castle was originally called Boğas-kesen, a sort of pun which means both ‘cut-throat’ and ‘cutter of the strait.” (The Turkish name for the Bosphorus is “Boğaz”, which means both strait and throat.) 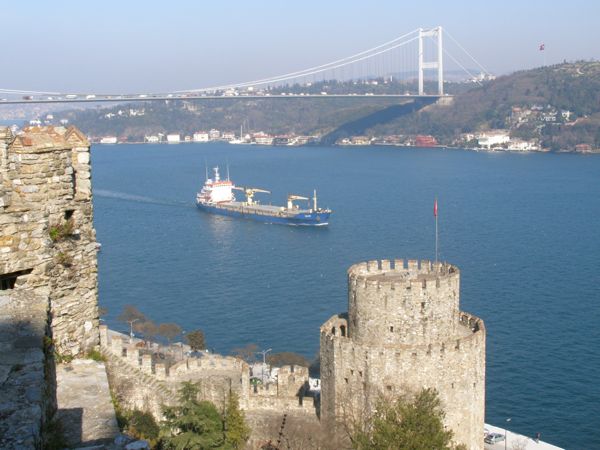 It is believed that Mehmet himself drew the general designs for this medeival fortress, which measured up to 275 yards long and 135 yards wide at its greatest points. The construction of each of the fortress’s three main towers was supervised by a different Pasha (vezir/advisor) of Mehmet the Conquerer, with his Grand Vezir in charge of the main one at the water’s edge. In addition to the three major towers are fifteen subordinate towers of various shapes and sizes. The walls of the larger towers range from 21 to 30 feet thick and the walls range from 16 to 50 feet high. It took 3000 men to complete the project in an amazing four months. 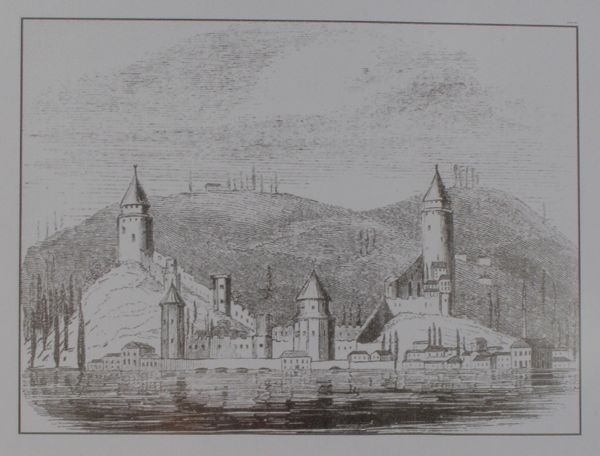 The Ottomans conquered Constantinople within a year after the construction of this castle, toppling the Byzantine capital and claiming it for the rising Ottoman Empire, which was to rule for nearly 500 years until 1923, when the Turkish Republic was established. 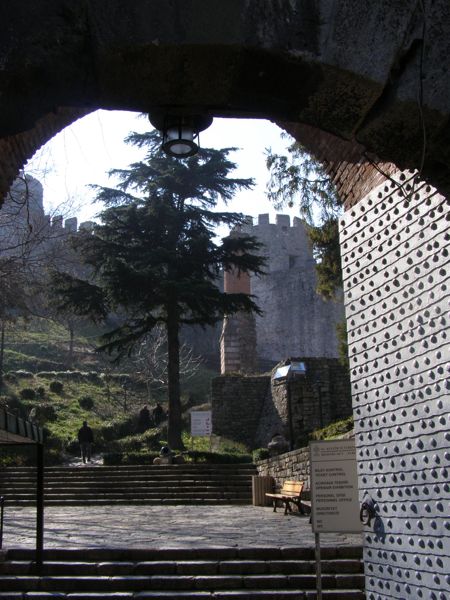 We climbed the stairs to the castle entrance, a little uncertain of our fate, but fortunately, the castle welcomes dogs as well as tourists. Whew! What met us inside was spectacular; LOTS of stone stairs up to the towers and ramparts—with NO railings. ARAUGHH!!! Libby’s balance is far better than mine, and she was eager to explore every inch of the castle. 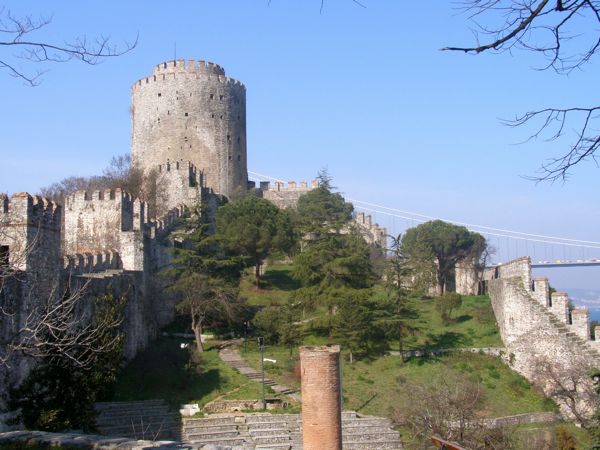 Inside the fortress there is a huge amphitheater, now used for outdoor concerts in the summer. There is also a minaret from a mosque built by Mehmet the Conquerer, although the mosque was destroyed by fire in 1907. 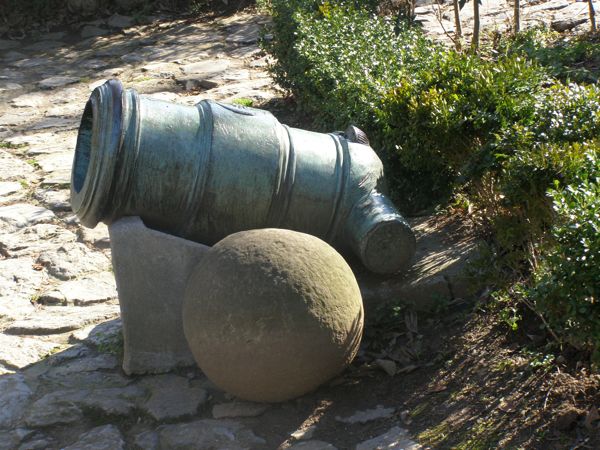 After scrambling around the ramparts for an hour, I decided to stop at a restaurant just outside the gates for a snack of tost (grilled cheese) and çay (tea)—for about five times the usual cost. Live and learn. Of course, it was lovely to relax in the sun by the Bosphorus, and the waiters made a fuss over Libby, bringing her enough cheese for five tost sandwiches.

A good time was had by all. 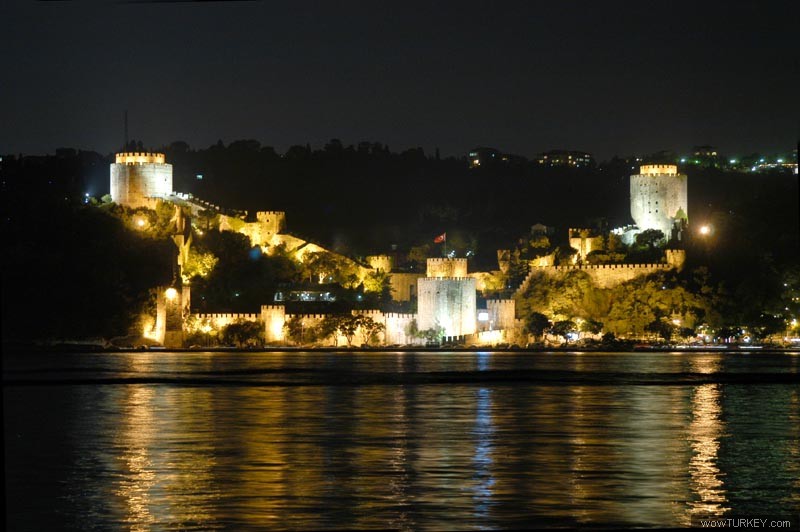 This photo of the Rumeli Castle at night comes from:

This web site has incredible photos of the Rumeli Castle, though I can’t find a name to attribute the photo to. Check it out!