THE SCARF: FREEDOM OR OPPRESSION?

When I walk the streets of Istanbul, there are always women in scarves. In more traditional communities it’s a majority, while in more modern, upscale communities, it’s less common. Older women are generally scarved, and younger women less often. 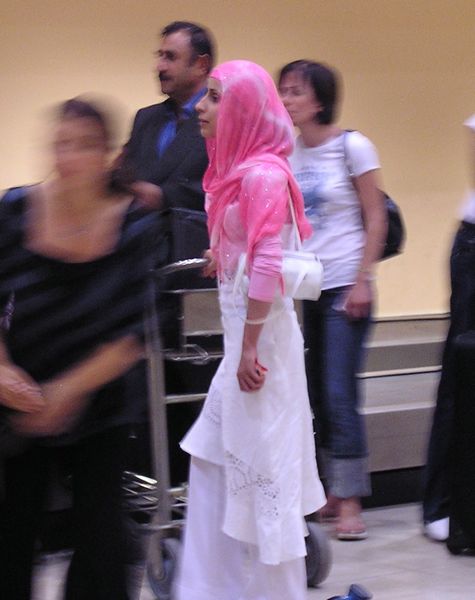 On rare occasions I’ll see two women, arm in arm, one scarved and one with tresses flowing free. It makes no difference to their friendship, though I find it a startling contrast. 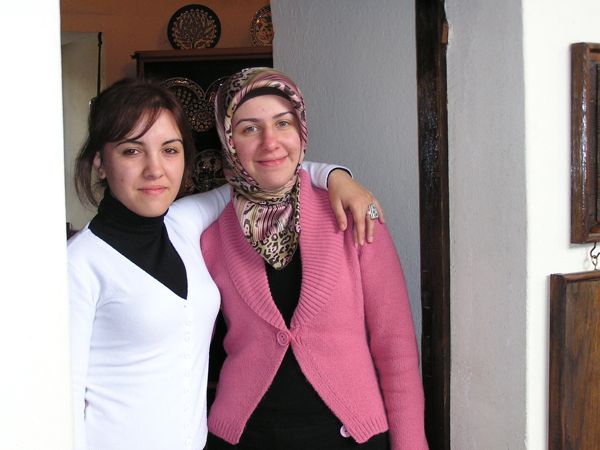 I’ve tried to accept this part of Islamic culture, and I’ve come close, though I still struggle with the unfairness of women being covered when men aren’t.

A book entitled Nine Parts of Desire: The Hidden World of Islamic Women, by Geraldine Brooks, enlightened me somewhat on the topic. Apparently the theory (Islamic) is that women are incredibly sensuous beings; Allah granted them 9 parts of desire, giving men only one. Therefore, women have to cover themselves in order to keep the world from descending into chaos (of a sensual nature).

Since the establishment of the Turkish Republic in 1923, it has been unlawful for women to wear scarves in public buildings, including schools. Mustafa Kemal Atatürk, Turkey’s revered founder, was adamant that Turkey be a secular state even though its predominant religion was Islam. That is still true in this country, which is 99% Muslim. Turks take great pride in their secular government, a model of democracy in an Islamic world. 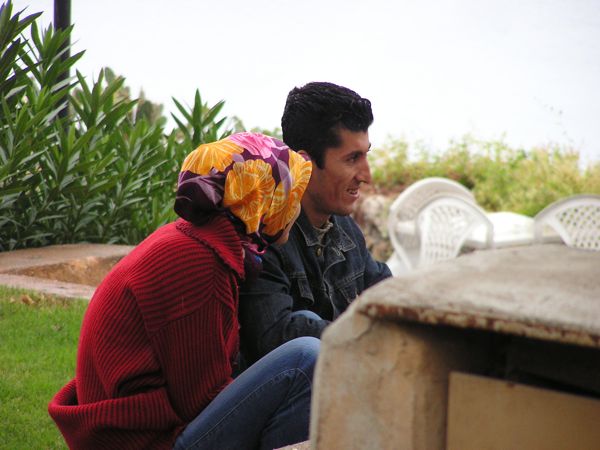 Before I moved to Turkey I read Orhan Pamuk’s book, Snow, a fictional response to the issue of scarves and education. In this novel, a journalist travels to Kars (“snow” in Turkish), a city in Eastern Turkey, to investigate the story of girls whose religious convictions to wear scarves has driven them to suicide because of being denied access to education. Pamuk’s approach is a critical one, though illuminating in its understanding of the issues faced by these young women. It opened my eyes to the passion many of these girls feel about covering their heads. 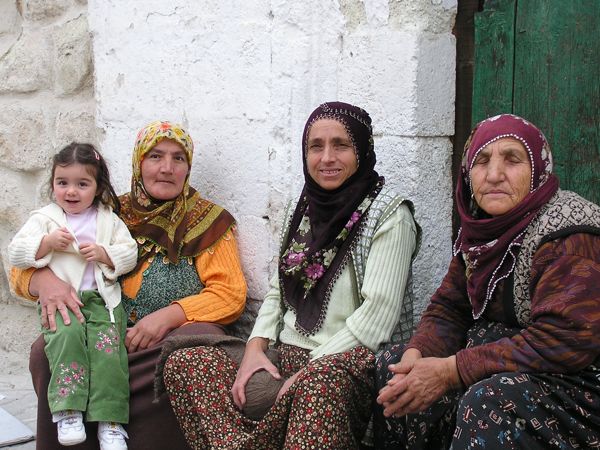 Scarved women of all ages in Göreme, Cappadocia, Turkey

Well, the deed is done, as you probably know. Amid great turmoil, Turkey has passed legislation allowing women to wear scarves in universities, as long as their faces aren’t covered. There are two sides to this issue, and both make sense.

Proponents of the ruling insist that it’s a move toward freedom for all and access to education for women, not a step towards an Islamic state. That works for me. In America many girls attend school scarved. (Of course, America isn’t a neighbor to a country that requires head-covering.)

Opponents feel that this is just one of many moves toward breaking down Turkey’s secular government, that it’s like a “test case” to amending the constitution away from secularism. They also view the headscarf as a symbol of political Islam. So who’s right? 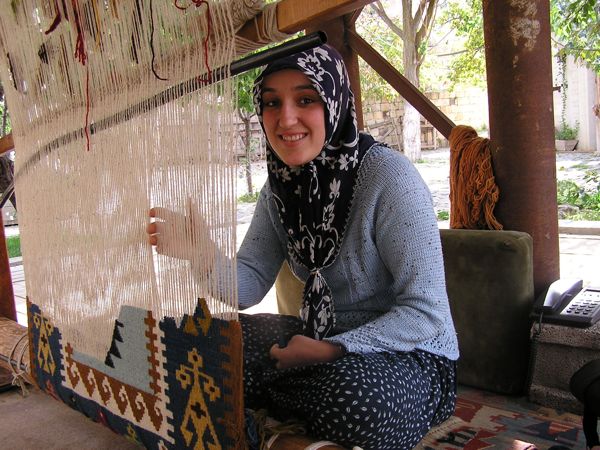 A young kilim-weaver in Cappadocia

I discussed this issue with a few university women, and they find it upsetting. They see both sides, yet feel threatened by the acceptance of scarves in their educational environment. “I worry that the pressure will be on me to take the scarf, or maybe on my daughter. We have a name for that social pressure in Turkey; it’s a lot like peer pressure, and it’s strong in our culture. I don’t want my country to go that way, but what can I do to prevent it?” one of them said.

A teacher friend shared that she’s unhappy with the ruling as well, although only a few of her university students appeared in scarves this week. She’s a liberal-minded woman, like many educators, and she feels the classroom isn’t the place for religious posturing. She commented, “This issue takes attention away from our country’s real problems: a shaky economy, lack of education, and ‘ugly’ world policies.” She’s not alone in this view. Many people have expressed a concern that much broader issues plague Turkey, and this issue has just been a governmental smokescreen to avoid tackling them. 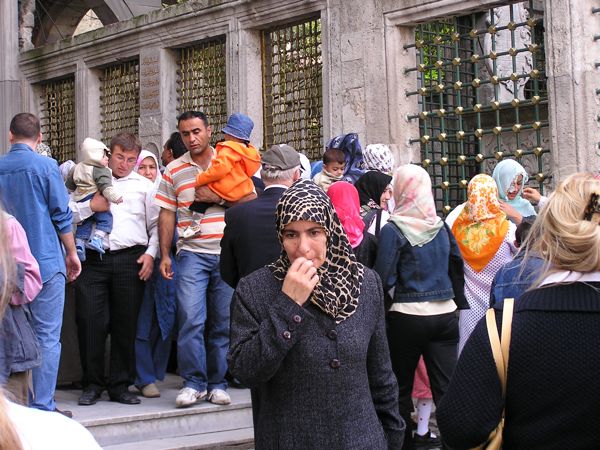 Worshippers in the traditional community of Eyüp

Though many people feel that the wearing of scarves is on the rise, a survey of women across Turkey in 2006 showed a decline in scarf wearing. In 1999, 73% of Turkish women wore a headscarf, while in 2006 the percentage had declined to 63%.* It is true, though, that many families choose to keep their daughters out of school once they reach puberty. Turkey has sponsored many programs to promote the continued education of girls, with limited success.

I’m sure the CHP (secularist party) will bring this decision to an appeals court on the grounds that it’s unconstitutional, and no one knows where that will go. The Turkish military, which is charged with the responsibility of upholding the constitution and the secular state, doesn’t look kindly on this action either. It remains to be seen, though, whether they will intervene. It looks for now like things are settling. 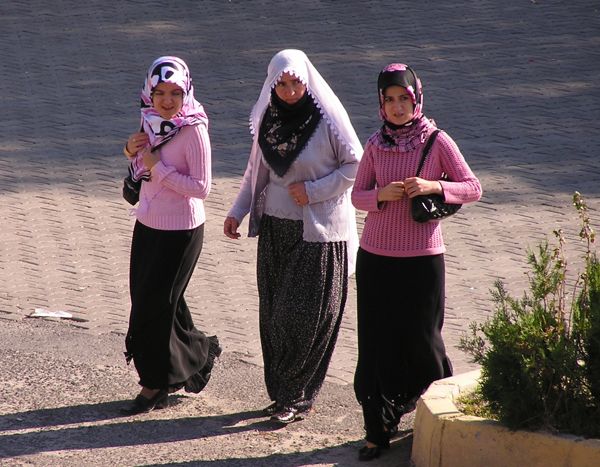 In the Best of All Possible Worlds, this would be a positive step. The problem, though, is mistrust and unspoken agendas. Time will tell, I guess. Until then, women will be free to wear scarves in Turkey’s universities.

3 thoughts on “The Scarf: Oppression or Freedom?”