After a bit of a bump (illness—poor, poor Susie), the two of us headed for the Greek islands two days late. We took a bus from Izmir to Cesme (CHESH-may), and hopped on the ferry to Chios, Greece.

Though my heart remains with the warm people of Turkey, I couldn’t help but be charmed by the light-spirited Greeks. It was a pleasant shock to see women operating as equals with men—waiting tables, driving motorbikes, and working in shops. This was quite a shift from Turkey, where nearly all service workers are male (though women are well-represented in the professional world). I was also surprised to see the ample physiques of the Greeks—obesity is rare among young Turks. A friend told us that the Greeks are the heaviest of the European populations. My theory is that their diet relies more heavily on olive oil and bread, while vegetables predominate the Turkish diet. 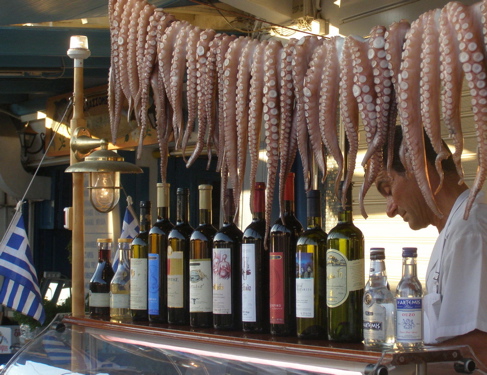 Chios Town was a bustling port, the harbor ringed with outdoor coffee shops, bars, and restaurants. We wheeled our suitcases to a spot near our targeted hotel (no reservations) and ordered cold drinks. As usual, we were drenched in sweat, but smiling. I went around the corner to make reservations at the Hotel Filoxenia, which was another second-story hotel, up about 25 marble stairs. Oh, well. We managed. Our corner room had a well-lit make-up mirror, a tiny balcony, and huge windows. We were happy!

The next morning at breakfast we started chatting with a Greek man about our plans for the day, and he offered to show us the island. Takis lives in Athens but was born on Chios and loves it dearly. He drove us (in his father’s rickety old Volvo) over the mountains to a beautiful secluded beach near a lovely chapel dedicated to Saint Markella, who was killed as she tried to escape her father (who intended to rape her for becoming a Christian). We swam in the turquoise water, shared grilled fish at a small beachside restaurant, then swam and lazed in the shade while Takis visited his home village to finish plans for a home he was building there. That evening we treated him to dinner and dancing. It was quite a day, let me tell you! 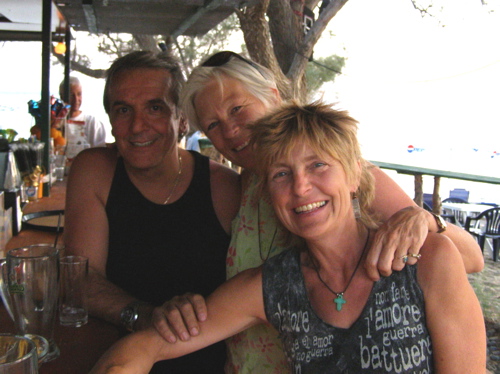 Our next stop was Mykonos, famous for its ancient windmills and pink pelicans. We took two ferries to get there, one to Samos, then another to Mykonos. They were both slow ferries, so we were able to wander the indoor decks as well as the top open deck. We enjoyed the ferries as much as the islands, which is good since we spent a good portion of our time on them. (Note to self: plan at least three days for each island, as it takes hours to travel from one to the next.) 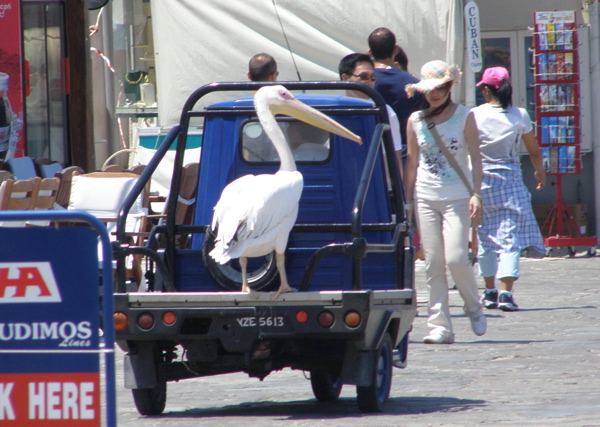 A PINK PELICAN HITCH-HIKER ON MYKONOS

When we arrived at Mykonos, we were a bit slow getting off the ferry, so we missed the bus and the taxis. Oops! We decided to drag our suitcases down the road and see if we could flag down a taxi along the way. Two young men stopped to offer us a ride in their open Jeep. We were surprised at their offer, and I imagine they were even more surprised to see that we weren’t sweet young things. However, they never showed their disappointment; they were charming—two Turkish guys who worked on a cruise ship and had rented a jeep to go into town for the evening. They laughed their heads off at my Turkish, though they were tickled to chat with me. They dropped us off near our hotel, though we chose a long, convoluted route through the meandering crowded streets of Friday Night Mykonos. 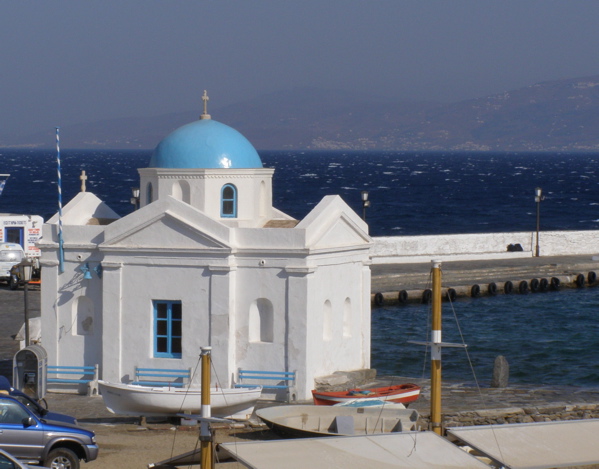 We finally found the Apollon Hotel, which was more than lovely. A sprightly old woman hopped off her antique daybed in the living room when we knocked on the door. She grinned as she embraced us, welcoming us warmly to her family home of hundreds of years. Although it was midnight, we went out to seek food and dancing. We ended up at a Greek taverna where we had saganaki (fried cheese) and moussaka (an eggplant hotdish). The people watching was incredible, with people dressed in every imaginable attire (including a man in a long-sleeved black T-shirt and grey briefs—my goodness!) By the time we were done eating, it was 1:30 and we were bushed. Oh, well.

After a good sleep, we packed up again (Maria needed to clean the room for her full house the next night) and headed out to explore our charming island. The streets in old Mykonos are all flat stones, and the buildings are all painted white with colored doors. It’s gorgeous. When we went back for our luggage, Maria charmed us yet again as we took her photos. Though her English is limited, she was an absolute delight, possibly my favorite thing in Mykonos. 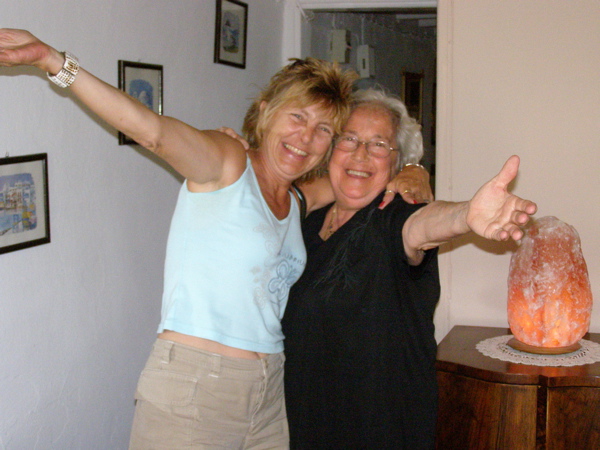 Next stop: Santorini, our “grand destination”. The island of Santorini is actually the top of a submerged volcano that erupted thousands of years ago. The city sits atop a steep caldera like white icing, overlooking small islands in its center. The great draw of Santorini is its spectacular sunset over the caldera. The first night Susie and I found a front-row table at a city cafe, and the second night we took a taxi to the Santos Winery, where we enjoyed a flight of wines with cheese for the big event. The wine on Santorini was delicious—far better than the Turkish wines I’d grown accustomed to. Of course, my favorite drink in Greece was Mythos, their slightly-sweet beer. I’m sure I drank my share! Needless to say, we found great dancing both nights on Santorini; I dragged Susie home before sunrise each night. 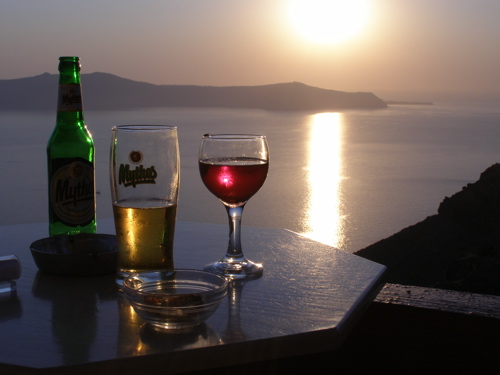 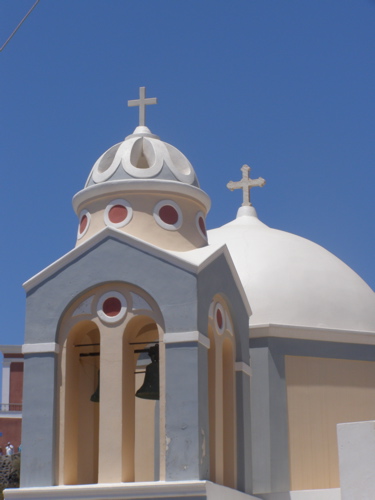 We also spent a night on Naxos, where we mostly basked in the pool of our hotel to while away the heat of the day. We explored the old city in the evening, though. The streets were strewn with oleander blossoms along the route of a Catholic procession that would happen later that evening. After relaxing on a secluded beach, imbibing in a late afternoon beer, and much searching, we found a restaurant recommended in the Lonely Planet, where we had what was easily the finest meal of our trip. Such luck we have!

Actually, we had many fine meals, incredible views, and delightful experiences in both Turkey and Greece. What a month!

No one can convince me that life isn’t truly grand. 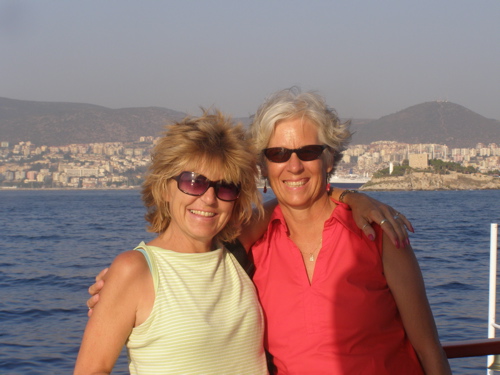 FAREWELL TO GREECE! (AT LEAST FOR NOW)