I’ve just spent ten days in Egypt, exploring Cairo, the Nile River Valley
(on a cruise ship), and the Sinai peninsula, which was my favorite.
Actually, i’ve had a lot of favorite experiences. It goes without saying
that 4000 years’ worth of pyramids, tombs, and temples are awe-inspiring. We
even visited the Temple of Karnak, which should bring smiles to anyone old
enough to remember Johnny Carson. 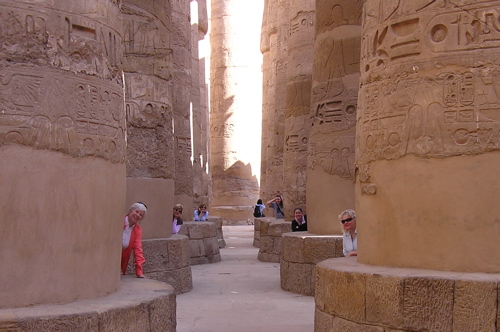 Anyway,one of our most interesting experiences was a felucca ride on the
Nile. A felucca is a fairly primitive sailboat used along the Nile.
It has one sail that hangs at a bit of a slant from its single mast, much
like a sailfish sail, and one man runs the boat, which can hold as many as
12 or 14 people. Anyway, we had two delightful felucca rides in Aswan (which
is LOVELY), so when we had a free afternoon in Luxor, we decided to hire a
felucca on our own. We did that before checking the wind. DUH!

My friend Allana negotiated a great price–the equivalent of 9 dollars for a
two-hour sail to Banana Island, exactly half of what the young captain
requested. Of course, he initially refused the price, but when we walked
away, he agreed to it. Business was slow. 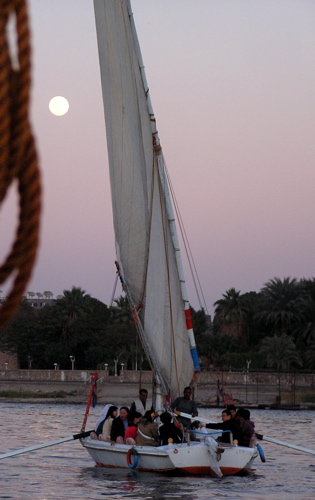 Captain Fox hoisted the sail, but he had to row out of the dock using hand-
crafted oars made from 2 by 4 lumber, painted. They were pretty worthless,
particularly for a 20-foot long and 8-foot wide boat. He assured us that he
would get out onto the river and catch the wind. What wind? Our tour guide,
Aiman moved in to row with him, and they were both working hard. Captain Fox
removed his sweater, then his shirt. He kept a t-shirt on, though. (I never
saw an Egyptian man shirtless.) They rowed us all the way across the Nile to
a group of people who were standing by some motorboat ferries, so we felt
confident that we’d get a tow. Nope.

Captain Fox removed his jeans (He had patterned boxers, which were quite nice),
hopped off the boat, and began TOWING us along the shore. We felt terrible.
it had been well over 45 minutes, and we begged him to give up and we’d help
row back. No dice. he was pulling toward a water buffalo, which we thought
might be enlisted to service the boat. he pulled on by it, sloshing through
the muddy riverbank, sometimes up on the prickly grass banks. He pulled us
by a few camels who looked at us curiously, but Captain Fox continued. He
was determined to get his fee–and to get us to the promised Banana island.
Allana reminded us that he had been well aware that there was no wind, and
that he knew what he’d been getting into. True, but it didn’t make us feel
much better. 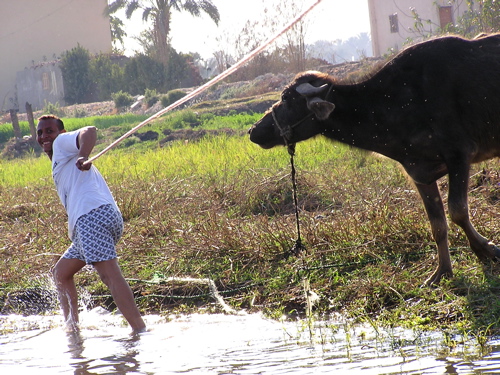 He enlisted Aiman (our guide) to wave a white scarf as boats came by, which
became quite a production. Who could resist?

A tugboat finally came by towing two other feluccas, and they sidled up to
pick up a tow rope. There we were, three sailboats lined up behind a
tugboat. ‘The Nile Felucca Choo-Choo” Dee dubbed it. It was pretty
hilarious.

All good things come to an end, though, and the tow rope came
untied, so once again we were stranded in the middle of the river. Captain
Fox let us ‘woman’ the oars, which was fun–we rowed back to shore, and our
intrepid hero jumped back into the water and manned a new tow rope.

We finally arrived at Banana Island, after a farmer chewed out our Captain
for treading on his land. I think he wanted money or something. Captain Fox
pulled his jeans back on and escorted us up a path away from the water.
There we were treated to a serviceable bathroom, a banana plantation tour,
and a few bunches of delicious (though tiny) bananas. When we got back to
the felucca, Captain Fox scrubbed down the decks and pulled out a little
stove to brew us some tea. Nile water tea? Though we weren’t sure about
drinking it, we were all too polite to refuse. he had a little table on
board for serving, and he spooned in sugar from a china sugar bowl. 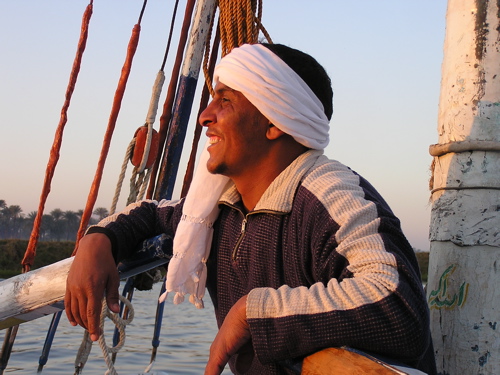 WE assumed we’d be towed back to the dock, especially since Captain Fox took
endless time cleaning up, tying up the sail, putting his shirt back on, etc.
We were pretty astonished when he pulled out the oars again.

No one offered to tow us, and we all took turns rowing the boat back across
the nile. Fortunately, this trip was downstream, so it wasn’t as strenuous.
There was no towing, just rowing. 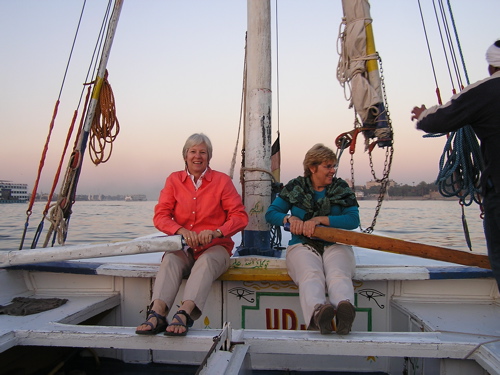 We watched the sun set over the Nile,
laughed as we raced to escape the path of an oncoming cruise ship, and bid
our friendly captain a fond farewell. of course we gave him a big tip. A
HUGE tip. He had known exactly what he was doing. We negotiated a great bargain,
we had a delightful adventure, and he was well paid. Everyone was happy.