I’ve spent a busy few weeks here—four days on the Koç campus with my friend Marnie, then ten in Kadiköy in my friend Leah’s apartment. Most of the time I’ve worked on our book of walking tours around the Grand Bazaar. It’s been grueling, fascinating, and fun. What adventures I’ve had!

On my second day here, Edda and I did the first walk with Marnie serving as our tour guide (to test our directions). I learned quickly that the directions needed to be FAR clearer. First test: C+. (We didn’t let her use the maps, which I’m confident will help.) 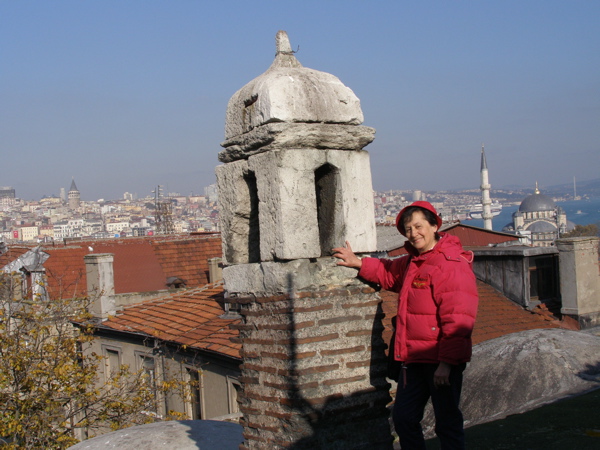 The next test was walk two, which Edda and I did by ourselves a few days later. We added meticulous details to our directions, carefully checking street names and building locations. We also did some interviews for feature articles. Edda helped me shop in the Cebeci Han for a belly-dancing costume for my sister-in-law, too. WOW—the shopowner kept pulling outfit after outfit from some mysterious source; the selections were incredible. Women shopowners are extremely rare in Turkey, so I was pleased to buy from a woman. That was a successful day for us—second test: B+ (a few wrinkles in building locations). 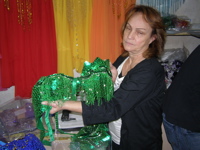 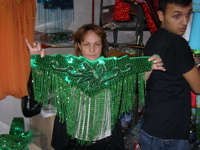 One of many belly-dancing selections

We spent the next day working in Edda’s charming (albeit treasure-cluttered) penthouse apartment overlooking the Golden Horn and Sultanahmet. It was supposed to rain that day, hence the choice to review photos and clarify details together, our laptops side by side on her kitchen table. I had no idea that she’d lay out a lavish lunch for me: mushroom soup (tantalizing), shredded vegetable salad (scrumptious), olives, pickled beets, and fresh bread. YUM! Once I was completely full, she pulled out the main dish: a big bowl of rice topped with a delicious vegetable and sausage goulash (from her Austrian roots). Full as I was, I managed to devour every bite. When she pushed me to seconds, though, there was no hope. I was STUFFED! That was my Thanksgiving dinner. And I am truly thankful for all that I have.

The next day (forecast cloudy with little chance of rain) we met at the Çemberitaş monument near the Grand Bazaar, umbrellas in hand. I’d forgotten my camera, but it was no great loss, as it rained all day. At one point we were climbing a steep cobblestone street in a downpour. The tile gutter running down the center was a torrent, and water poured over our feet. Nothing to do but continue, which we did. Yet another Istanbul adventure.

Our last day of trekking together was a long one, and the highlight was a rooftop that I had discovered on my own. The Sair Han (the Büyük Valide Han’s third courtyard) has an outdoor stone stairway leading up to a rooftop with an amazing view overlooking the Golden Horn and the Marmara (and lots of stray dogs). We were snapping pictures when a friendly young man carrying a white chicken appeared and began chatting with us. He offered to show us the view from the highest point, and of course we accepted. He led us around the corner of the Tower of Eirene, a crumbling edifice on the corner of the rooftop, and we clambered up two more rooftop levels to the pinnacle—what fun! (Let me remind you that my friend Edda is 70 years old—a youthful and sprightly woman always game for adventure.) At the top we discovered two tiny workshops, one for dying lace, and the other for making tea. Unbelievable. Luckily, our young guide (a tea shop owner from the main floor of the han) led us down through a maze of crumbling stairways to his shop, where he invited us to return later. Unfortunately, we didn’t. Too busy! 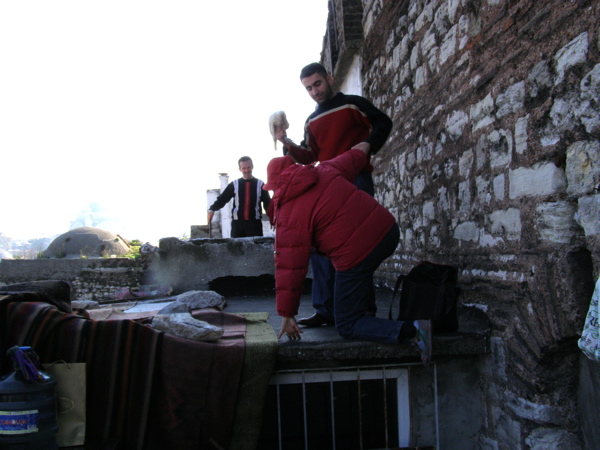 Edda scrambling up the Tower of Eirene

Another highlight that day was an interview with a street cobbler, a man who sets up shop every day on a corner beneath a tree. Year round, he brings his table, an old sewing machine, and his last (a cobbler’s tool). When it rains, he adds an umbrella, and when its cold, a small grill. What a guy! 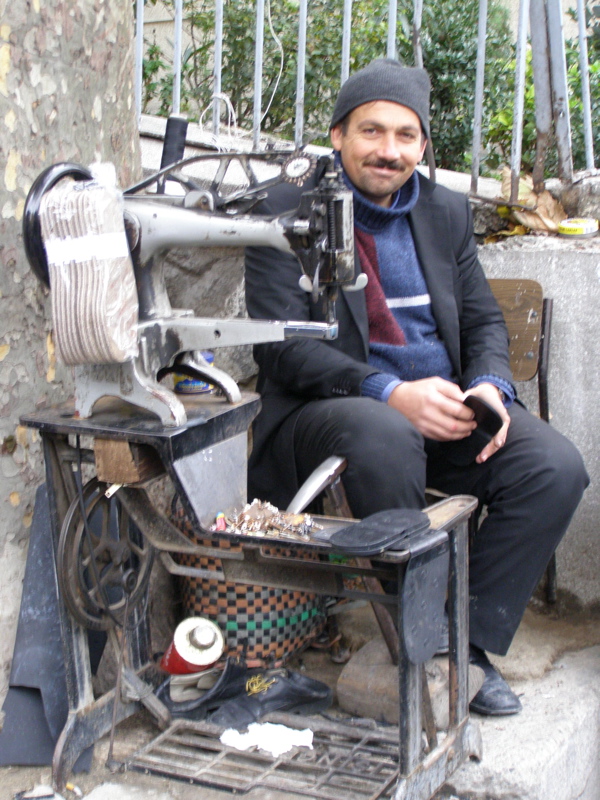 It’s been a fun, rewarding, and exhausting week. 2000 photos and 40,000 words behind me, I’m hankering for a LONG nap on the plane. By the way, yesterday we delivered our book to Çitlembik Publishers—all except the maps. I have to make some corrections on those. It’s been an exciting project, and I know the work is far from over, but we’re on schedule. HOORAY!!!!! 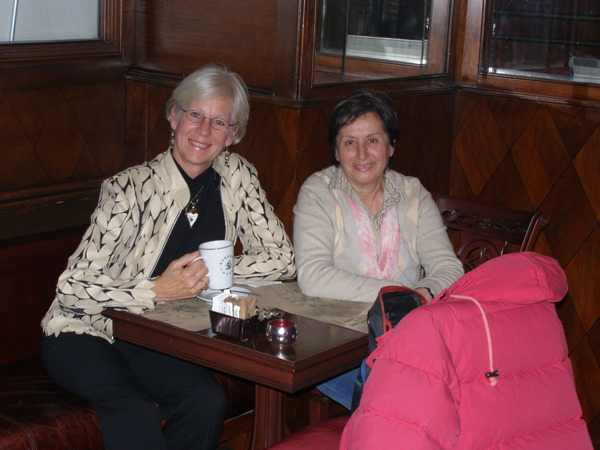 Edda and I celebrating our completed project

One thought on “Finishing the book—all over Istanbul”