What does one share in Istanbul when friends have only a few days? Let me tell you, it’s a dilemma. I did my best, but you never know. My friends Jerry, Dan, and Lynette arrived last Thursday and indulged in a long afternoon walk before I arrived home from school, greatly relieved that they’d found their way. A man pulled Jerry aside at the baggage carousel (How did that happen?) and offered him a ride to Arnavutkoy for 450 lira (about $300). Jerry talked him down to $200, then informed him that he knew they could get a taxi for 40 to 50 lira. Shameful! I wondered how many tourists get pulled in on that one. 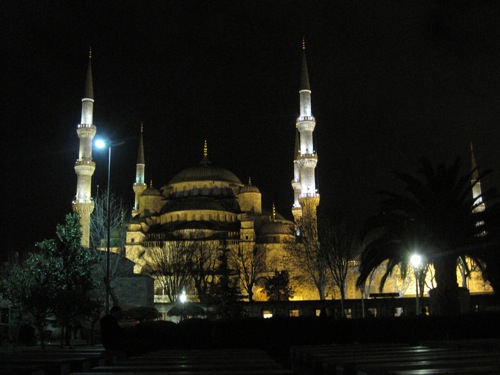 My friends wanted to know how to take public transport into Sultanahmet, so we headed off. Once we arrived, they informed me that they were totally exhausted. Oops–what was I thinking? I took them to a carpet shop for tea and a rug show (oh, so tempting!), 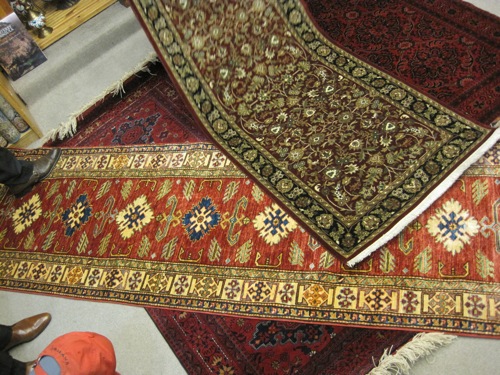 then off to the Doy-Doy for a their first Turkish meal. They weren’t disappointed. It was still early enough to catch a ferry straight home, which saved us some hours on crowded public transport.
.

My guests were on their own Friday, but on Saturday my friend David joined us for  the full monty of shopping in Sultanahmet: Leather jackets under the Laleli Mosque (where the leather dealer gifted me with a fur collar-wrap), then up to see the mosque and over to the Taş Han for a lunch of mezes and mercimek (hors d’oeuvres and lentil soup). 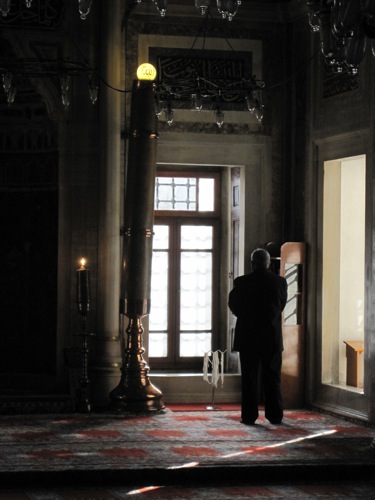 A man prayed in the Laleli Mosque 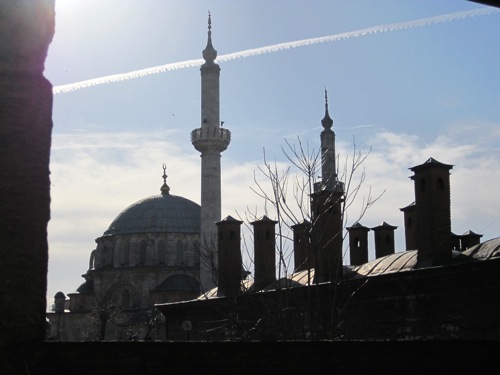 The Laleli Mosque viewed through the chimneys of the Taş Han

Then we were off to “scarf street” via a men’s hat store, a purse store, a towel-seller, and finally: TA-DA! SCARVES!!! We stopped for a rejuvinating beverage on our way back to Huseyin’s carpet shop (Harem 49) where we finalized a few purchases. 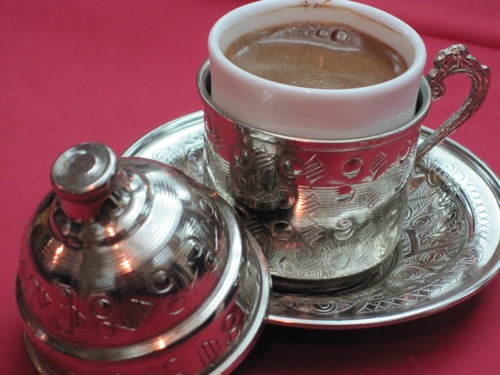 A rejuvenating cup of Turkish coffee 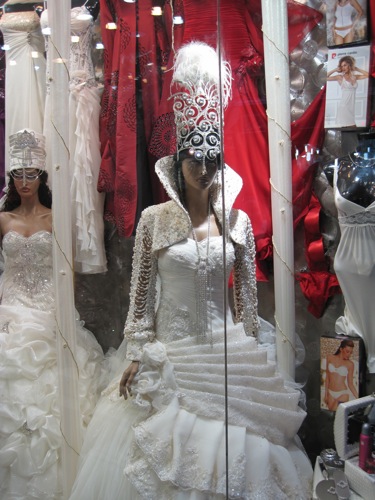 …and a unique wedding ensemble near the Grand Bazaar

Totally exhausted, we headed home on the overcrowded tram. We hurried across the road to catch our bus, and the driver started driving off before we were all on. ARAUGHHH!!! Relieved to be safely back in Arnavutköy, we toasted to friendship with a fabulous Bulgarian wine (thanks, David).
We slept in late Sunday morning, then walked down to the Fincan Cafe for a classic (noon) Turkish breakfast of cheese, tomatoes, cucumbers, olives, egg, bread, clotted cream, and honey. YUM!!!

That evening Jerry and Dan concocted a delectable eggplant, onion, garlic, tomato, and rice stuffing for dried eggplant shells that had captured their imaginations earlier in the day. Lynette and I were appropriately impressed; I do admire good cooking—and even more, people who enjoy doing it. I’m mostly partial to the eating part. 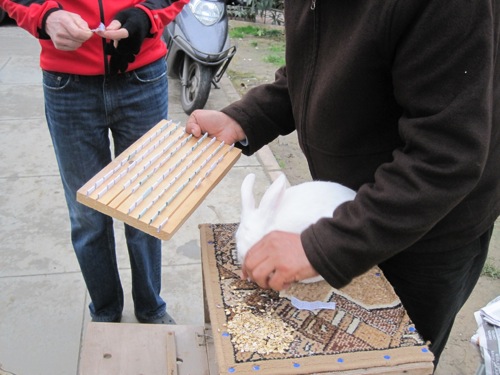 Ever had your fortune told by a rabbit? This one chooses a “fortune” from the rows of papers in this man’s hand–very scientific. Mine said “You will be lopressed by some sad news.” (among other things).

My guests explored the city for the next three days while I slaved at school (it’s actually not that hard), and on Wednesday Dan and Lynette left for Cyprus. The first evening they were gone, Jerry and Libby walked up the hill after school to me along the narrow stone-walled roadway. It was more than sweet.
That night Jerry and I trekked back up for the school Christmas party—mulled wine, Santa Claus, and a sumptuous meal (except for turkey so dry it totally dehydrated me—don’t tell the chef). Everything else, though, was lovely, including the company. We joined in Margaret’s Christmas song-fest in Marble Hall to top off the festivities. 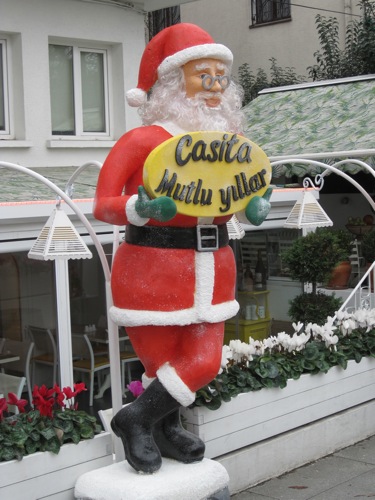 This Bebek santa is a bit thin, but wishes you a Happy New Year. (Mutlu Yillar)

Today was our last day of school before an incredibly rare Christmas break (in Turkey it’s usually just a day off). Everyone was jazzed. My core English class had a gala Christmas party this morning, including delicacies baked by a few students. Why did I bother to eat breakfast? Gosh, I love those kids. All of them.

The entire class posed with their ancient English teacher 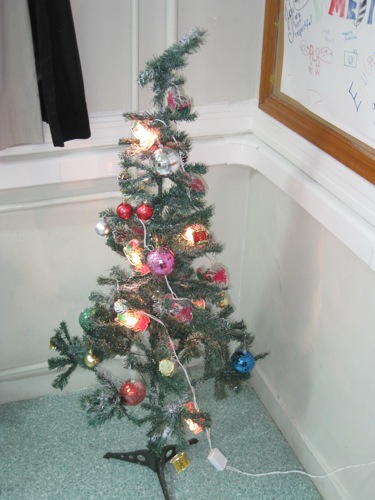 It’s raining cats and dogs tonight, but tomorrow we leave for a sunny week on the Mediterranean—Antalya. We can’t wait. Neither can Libby.
I send a hearty Merry Christmas to all from the Blustery Bosphorus.

One thought on “Twas the week before Christmas…in Istanbul”