I was going to write about the Istanbul Marathon today, but I must sheepishly admit that my friends and I were put off by a bit of rain. Actually, it was pouring this morning, and I didn’t much want to walk in the rain, especially with my still-reticent knees. Missed the annual opportunity to walk from Asia to Europe. Maybe next year… 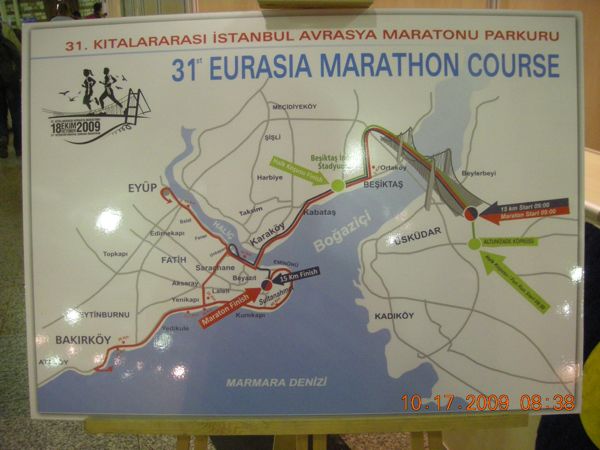 The Marathon we missed on Sunday

SO—instead, I’ll share my world. First off, the apartment. My apartment is more than sweet, a little train-like affair of three consecutive rooms. My double-bolted door is situated up a dozen marble stairs from the street, an enclosed, roofed stairway. After it rains, scores of tiny tree snails crawl up the walls. It’s unbelievable. I have to sweep the snails down a few times a week.

Once you step in the door, you’ll see a small kitchen on the left with new granite countertops and bright, shining cupboards. I don’t have enough to fill them yet, but you never know. The recycling is piling up, and that takes some space. 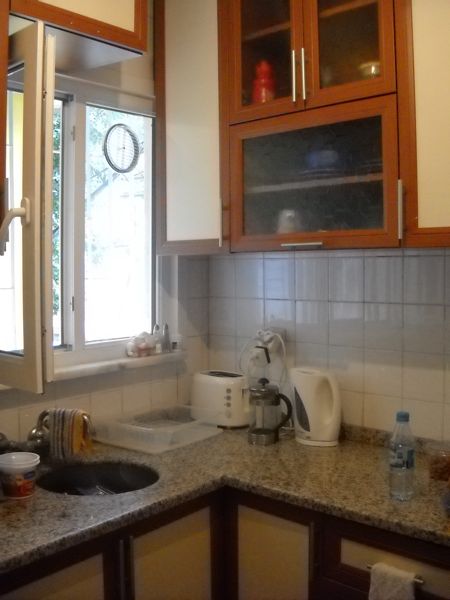 To the right of the entryway is a tiny bathroom—adequate for one person. Don’t try to brush your teeth at the same time as me, though; you might fall into the toilet. There’s a small shower with a molded fiberglass seat, good for piling newly-washed sheets and rugs. Laundry is a challenge here, as I have no washing machine, and town doesn’t seem to have a laundromat. I’m washing things by hand and learning why women didn’t used to work outside the home. No time! Have to find a washboard, I think.

OK, back to the apartment. You step through a glass-paned wooden door into the living room, which sports a couch, two easy chairs, and a little half-round table. It’s perfect for me, and I can even entertain a few people. I’ve hung a bright red rug over the couch, and I have my green ushak on the floor. 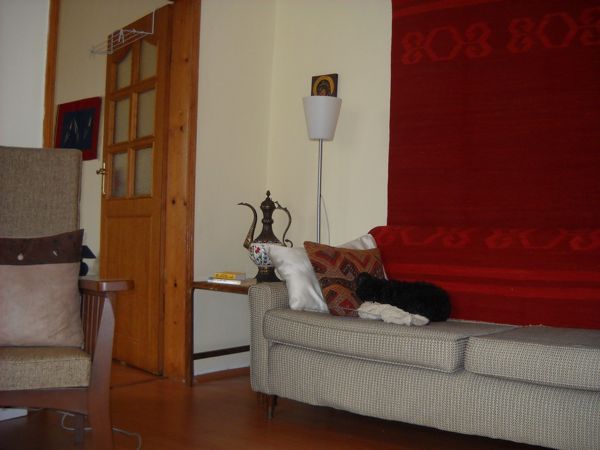 Libby curled up with my knitting in the living room

The premier feature of this room, though, is the view. I sit at my windowside table and marvel at the glittering Bosphorous as ships both huge and tiny navigate the busy waterway.  The metal grills over the windows hardly bother me; all first floor windows are grilled in Istanbul—safety. 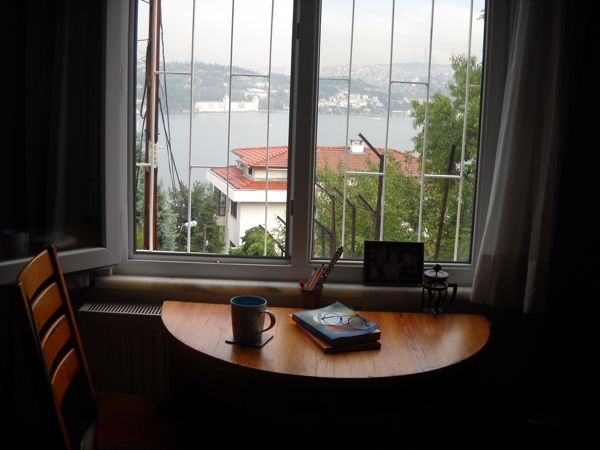 My perch in the living room

Through the next door is a bedroom with a double bed, a dresser, a low cabinet, and yet another breathtaking view. Libby perches on a suitcase wedged next to the window and supervises the neighborhood. Just below her lookout is the 203-step “street” (Eğlence Sokağı) leading “downtown”. There’s plenty of foot traffic on it, both two and four-legged. Libby, of course, finds the latter more intriguing. 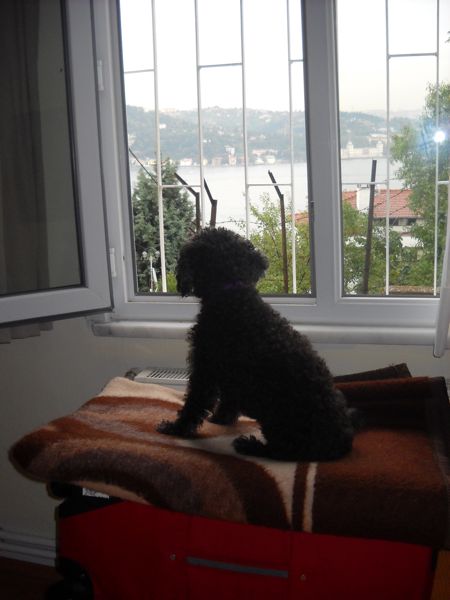 Libby’s supervisory seat for the neighborhood 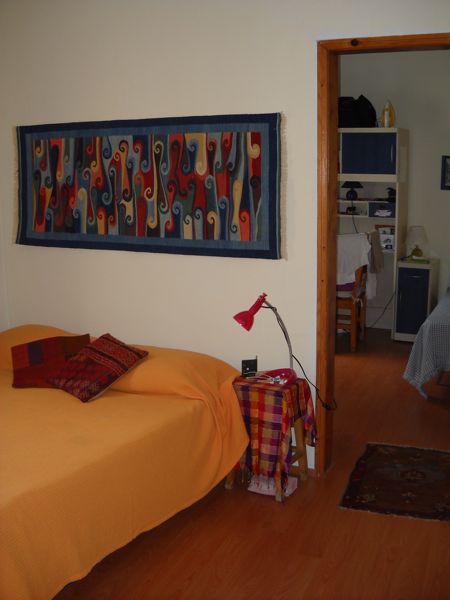 A train-like view through the bedrooms

The last room, through yet another glass-paned door, is my guest room/office. There you’ll find an armoire, a desk, wall shelves, and a single bed. Of course, this room also features the fabulous Bosphorous vista. Lucky me, huh? 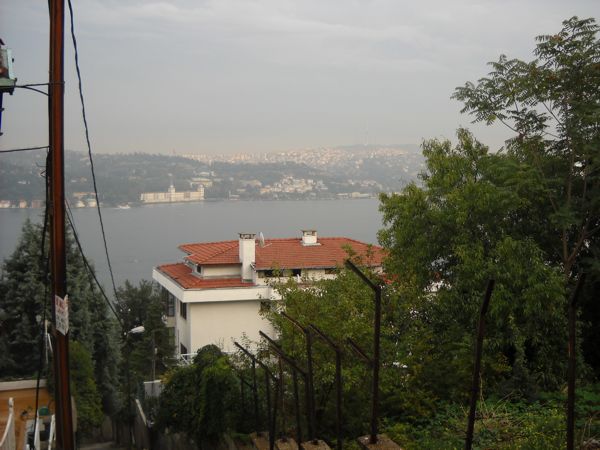 Libby and I go for a walk two or three times a day. She’s particularly fond of the local felines and has developed a complicated ritual of chasing them. If she’s not scrabbling after one under a parked car, she’s chasing another into the nearest tree. 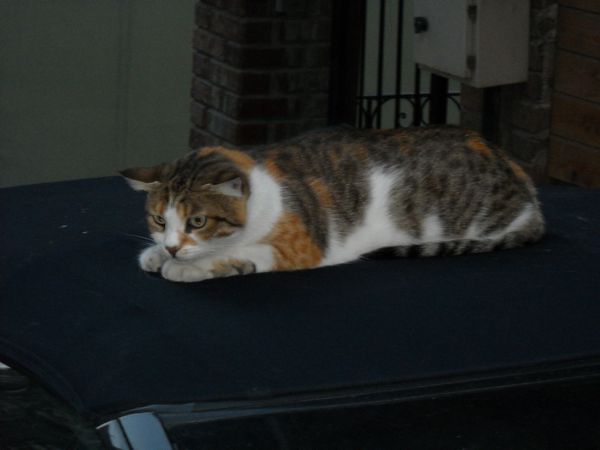 A young calico glowers at Libby from the top of a convertible.

Many of these cats have computed the length of her leash (16 feet, retractable), and they often stop just beyond her reach to thumb their kitten noses at her. Another favorite trick is to come flying back at her. Occasionally a cat will stand its ground, and Libby knows better than to push her luck. She’s been scratched before, and she didn’t much like it. 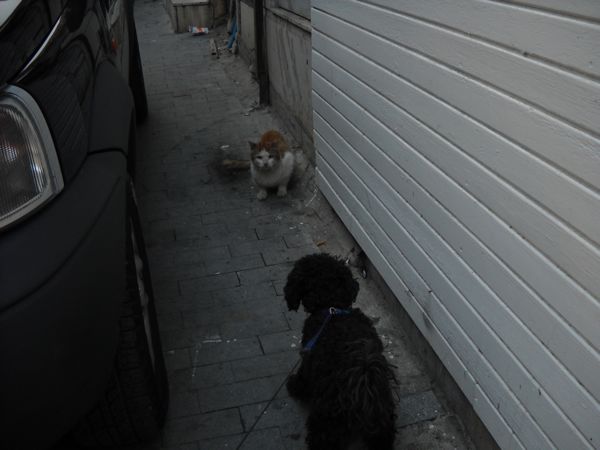 A stand-off beside a car.

The hardest part of Libby’s world is the stray dogs. They just aren’t that fond of her, particularly Irma. She’s a stray just up the street on the way to school, and one of her ears is missing. Is that what makes her so cranky? Who knows. When she sees Libby her hackles go up and she sneaks in for the attack. If I spot her in time, I scold her, and she lurks off. She often surprises us later though, the little minx. She was adopted by a neighbor (the daughter of the nice retired man who walks Pablo, a big bulldog), and she thinks she’s in charge of the neighborhood. Oh, well. Maybe she is. I tried bringing treats for her, but she’ll only take them if Libby isn’t around, and she’s never come close enough to be petted. 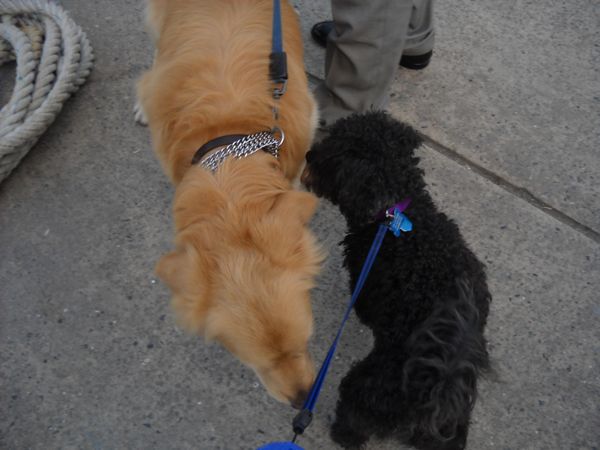 It’s not just Irma, though. It’s ALL the stray dogs. They lie in wait for Libby, then as we come down the street they start the barking chain, like in Lady and the Tramp. Every morning we leave the house around 6 AM, and within minutes the entire pack of Arnavutkoy dogs are barking their heads off, warning each other that Libby’s on her walk. “It’s only fair, since you terrorize the cats,” I tell her. Libby rolls her eyes. 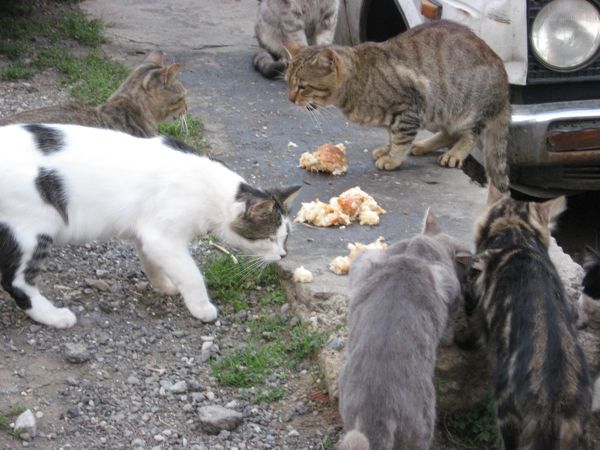 I have to tell you, though, that both Libby and I are happy here in spite of the problems we face. Heck, when is life all roses? Of course, we both like to THINK it is, even if it rains on our marathon. Sigh…

2 thoughts on “Not the Istanbul Marathon”