Navigating the streets of Istanbul offers either adventure or challenge, whichever you make it. I enjoy it, especially now that I know my way around (after four years). Good maps are an absolute necessity, at least early on, and my favorites were the back pages of the DK Istanbul guidebook. One thing they don’t have on those maps, though, is the location of public rest rooms. Crucial information. I often just make a point of stopping for a cup of coffee or tea and use the restaurant’s facilities, but I’ve also located some very lovely tuvalets near tourist spots. My favorite is the one at the Arasta Bazaar, just around the corner from the Blue Mosque. The rest rooms cost a lira (about 60 cents), but they’re sparking clean, and definitely eye candy with their brilliant blue, white, and red ceramic tile décor. 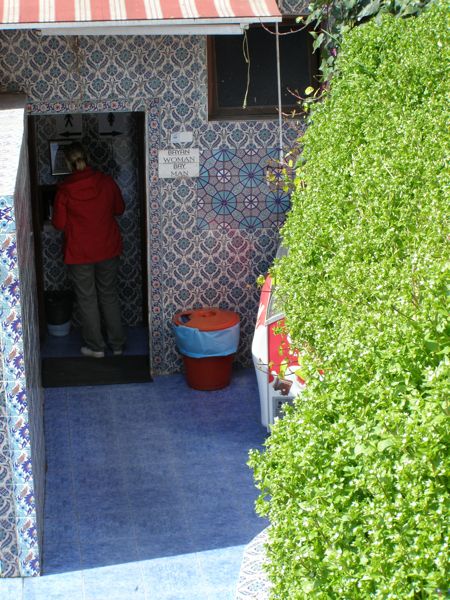 The bonus of a visit to the Arasta bazaar is always a cup of tea with Hüseyin Palioğlu at Harem 49—his treasure trove of a rug shop. In fact, during my visit with him last weekend, I succumbed to the allure of a lush green Uşak (Oushak) rug. It’s a design I’ve admired since first arriving in Turkey, and now I’m the proud owner of an enviable specimen. 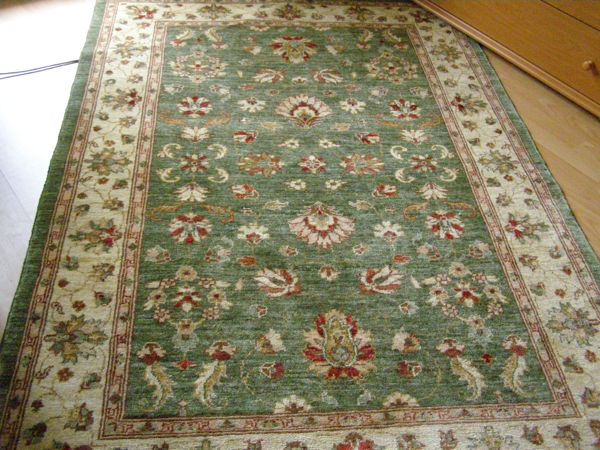 A body gets thirsty trekking Istanbul’s cobbled streets, but there’s always a juice seller nearby. Often they’re just little carts or storefronts, but in Sultanahmet there’s a bona-fide Orange stand. Something out of Sesame Street, complete with ornate-vested juice stewards. May I recommend the pomegranate juice? It’s merely 3 lira (about $2). Well worth the wait as they press the fruit right before your eyes. 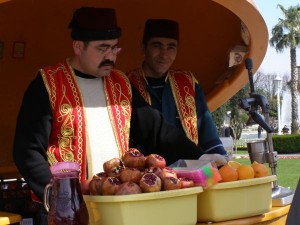 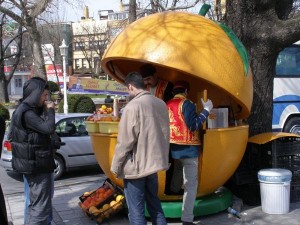 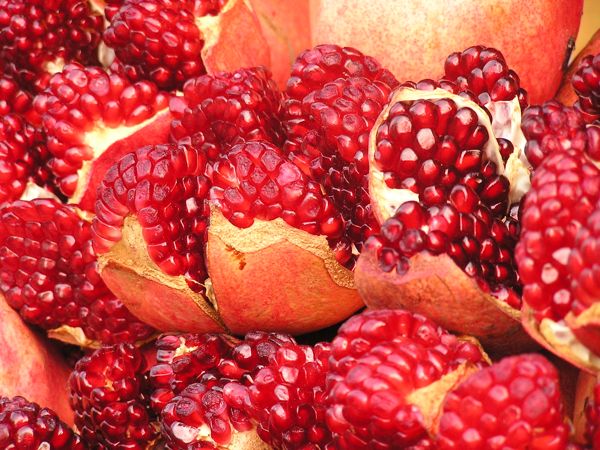 If you don’t stick around, though, you’ll have a bit of a shock when you can’t find a trash receptacle for your empty cup. There just aren’t any. You can walk blocks and blocks without finding a trash can of any kind, so I often step into a shop to ask if I can use their wastebasket (Çop var mi?). I’ve been told that the absence of trash cans is due to past bomb threats. Whatever the reason, it’s mighty inconvenient. I’ve carried an empty coffee cup or an apple core for hours. Unfortunately, many people just give up and throw their refuse on the street.

I’ve often seen men pulling huge bags of trash up and down the streets of the city, and thanks to my friend Cristi, I now know that they’re not trash but recycling bags. The city pays men to walk the streets picking up recyclables (and sorting through trash bins for them as well). It’s a humble beginning for a recycling program, but it’s alleviated much of the trash that was once strewn all over the city. 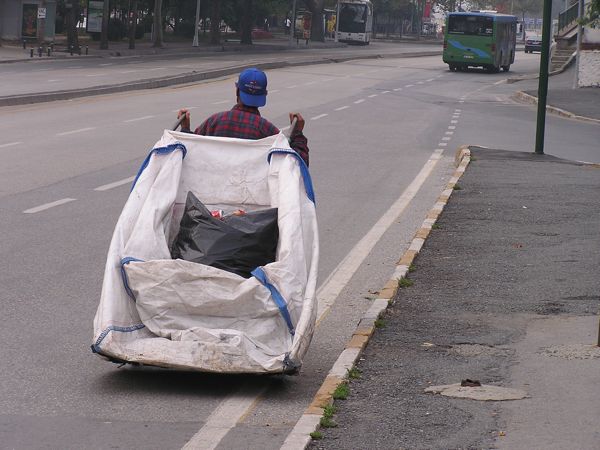 A man at the start of his recycling route.

Last weekend I came across two such collectors relaxing on a half-full recycling bag enjoying a smoke break. They kindly agreed to a photo. (“Foto çekabilir miyim?” is a question I ask many times a day when trekking the city.) Istanbul employs thousands of street cleaners and rubbage collectors, and the improvement they’ve made over the past four years is commendable. 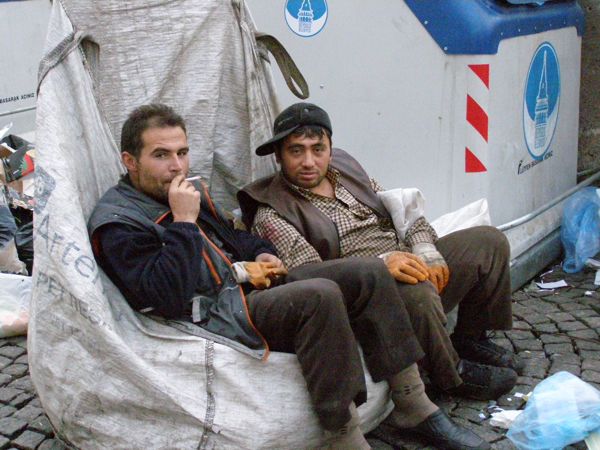 They also hire men to cruise the streets with large, flat 2-wheeled carts collecting scrap metal. Though I didn’t spot any this weekend, I did snap a photo of the overnight trash accumulated on a street in Kadiköy. Slowly, slowly, the city’s garbage problems are being addressed. Try to imagine how much trash is generated by a city of 15 million… 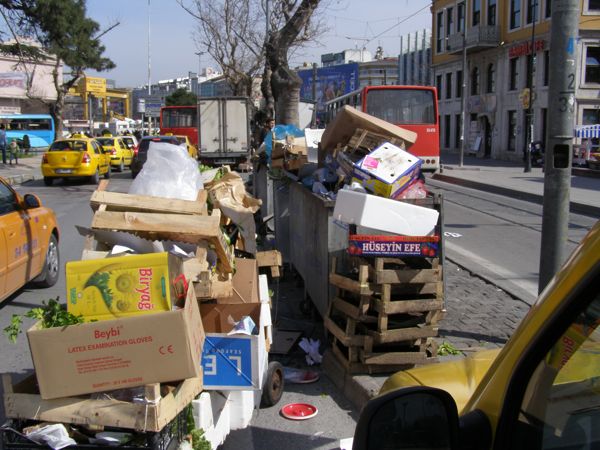 A night’s trash waits for pick-up in Kadiköy.

There were a few other street surprises, the first one a curbside Turkcell bug holding a Hoş Geldiniz (welcome) sign. Pretty cute, especially in the sunshine. 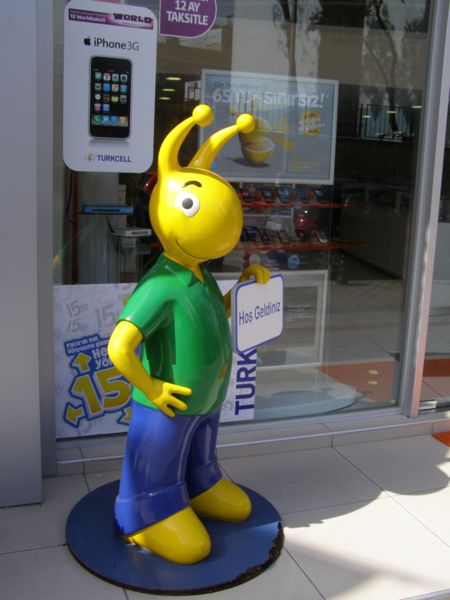 The Turkcell bug welcomes us to a Kadiköy cell phone shop.

The bigger surprise, though, is an advertising campaign by the Garanti Bank of Turkey, using President Barack Obama to promote their great interest rates. I can’t help but wonder if they got his permission. These posters are plastered all over the city. 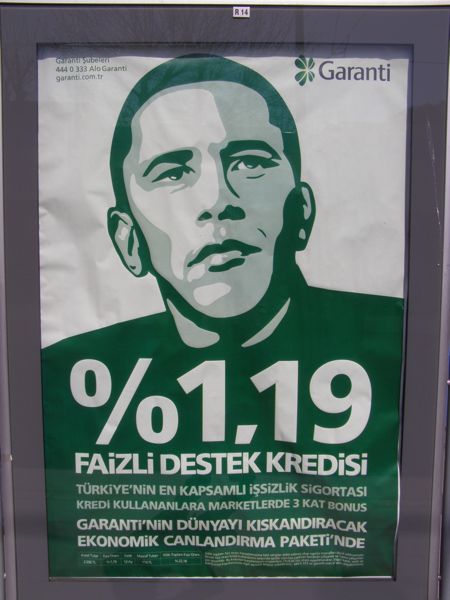 Yup, you never know what you’re going to encounter on the streets of Istanbul. Never.