Istanbul is about people, about history and about—yes, WATER! This may be the only major city that is both divided and surrounded by water. The Sea of Marmara borders Istanbul on the south, while the Bosphorus divides the European side from the Asian side, connecting to the Black Sea on the north. The European side of the city is divided into two more sectors by the Golden Horn. Water, water everywhere. 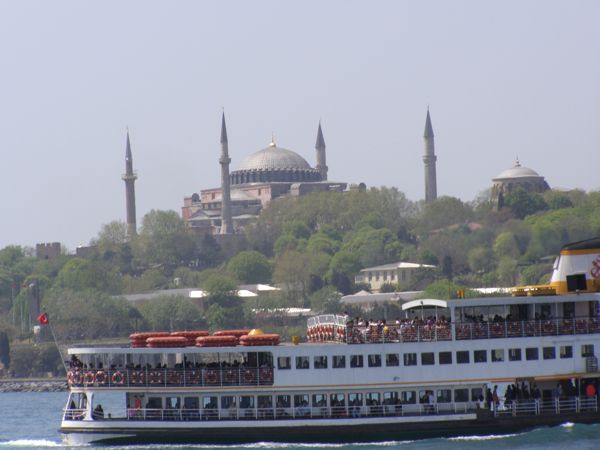 The Kadiköy-Eminönü Ferry, with the Aya Sofya (Haghia Sophia) behind it

The dilemma this creates, though, is transport. This city of over 11 million people has continuous comings and goings, and less than a fourth of its residents own cars. Two bridges span the Bosphorus, connecting the two continents (in a veritable traffic nightmare), while an intricate system of ferries totes the majority of commuters across the water from one side to the other. It’s also a great way to bypass the traffic jams that plague Istanbul. 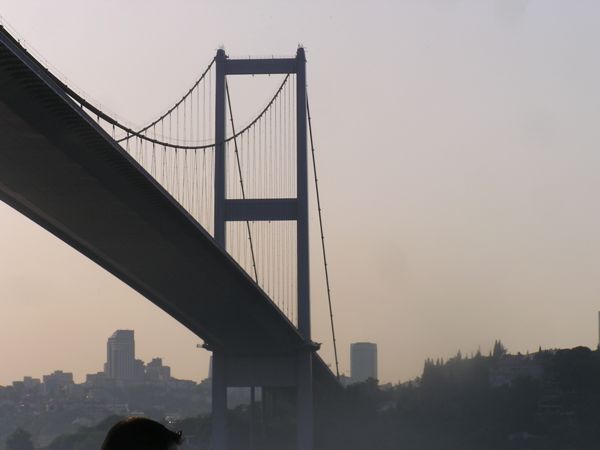 Bridge across the Bosphorus 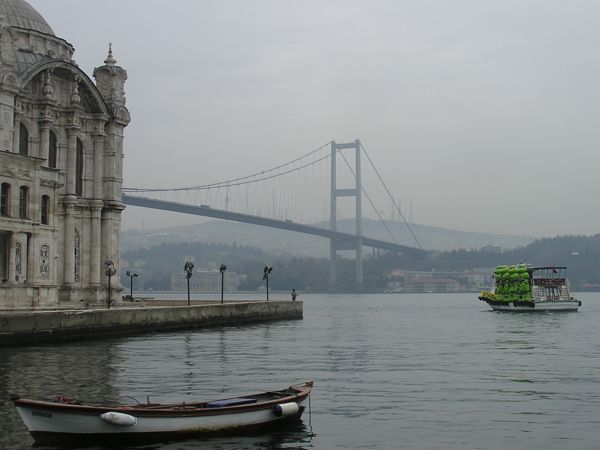 A private Ninja Turtle shuttle near the Ortaköy Mosque

Having spent my first two years on the Asian side, I first became familiar with the ferries from Kadiköy. Huge two and three-story ferryboats cross the Bosphorus about every half hour to Eminönü (the historical European side—Sultanahmet and the Grand Bazaar), with others heading to Karaköy (across the Golden Horn from Eminönü). Those ferries carry anywhere from a few hundred to a few thousand people. Two weeks ago I rode one with a mob of fans after a Fenerbahçe match—what a rush THAT was! 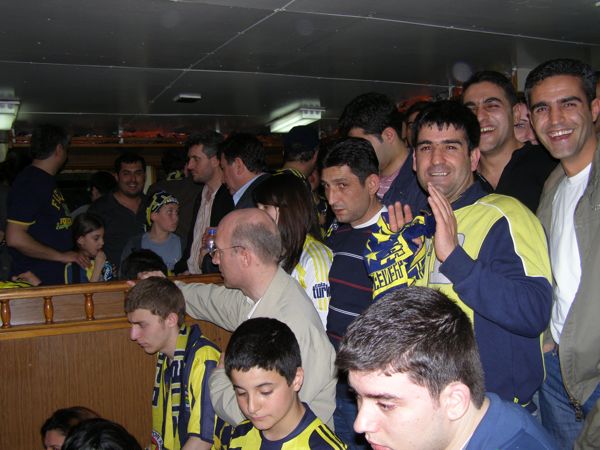 27 ferry stations serve the Marmara and the Bosphorus, with additional fast ferries serving points around the busier spots. You can also hire a water taxi, though I’ve only managed it once after missing the ferry from Eyup (near the end of the Golden Horn). My friends and I would have missed a Whirling Dervish performance, so we hired a little wooden skiff-taxi that I’m convinced was propelled by an inboard lawnmower motor. We arrived at our destination safe, though a bit chilly. 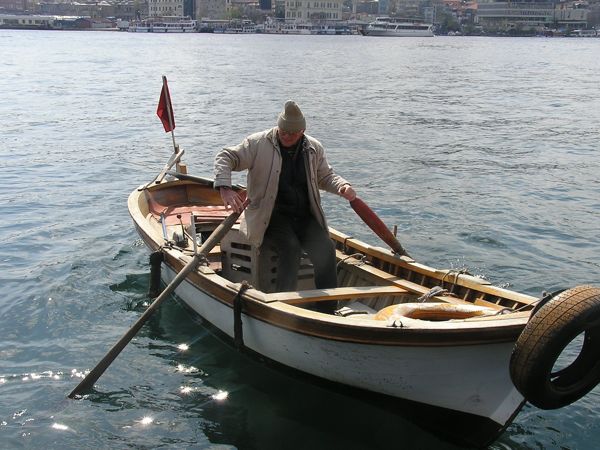 A ferry ride across the Bosphorus can be a lovely experience, particularly on a warm, sunny day. The ferry offers outside seating on benches along the perimeter and more outdoor benches at one end of the upper level, though the majority of the seating is inside. There’s a small concessionary on the second level, with a waiter who circulates throughout the ferry selling tea in glass tulip cups for about 50 cents. The ride usually takes about a half hour, a chance to relax and enjoy the water, the gulls, and views of Topkapı Palace, the Aya Sofya, and the Süleymaniye Mosque that dominate the city. The dance of ferries as they navigate around each other is amazing; only once did we nearly collide. 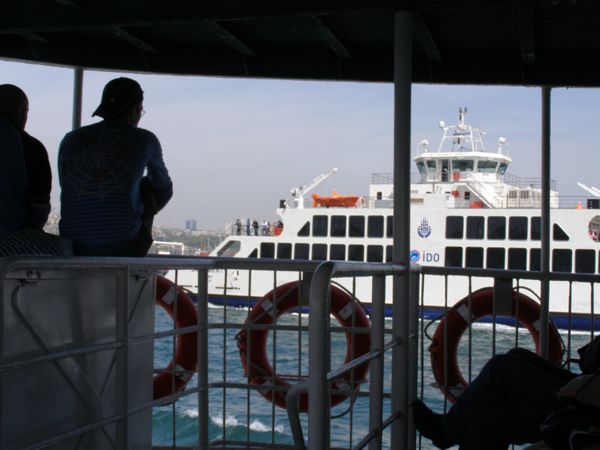 Ferries crossing, viewed from the outdoor upper deck
There are a few more modern ferries that cross the Marmara Sea, connecting Istanbul with Bursa and areas to the south. The Marmara (which means “marble”) is about the size of Lake Superior, though significantly warmer (and safer). There has been talk of modernizing all of Istanbul’s ferry boats, but people are hesitant to give up the charm of the city’s old ships. I understand. It would be sad to see them go. The newer ships that cross the Marmara are pleasant, but more like an airplane than a boat. 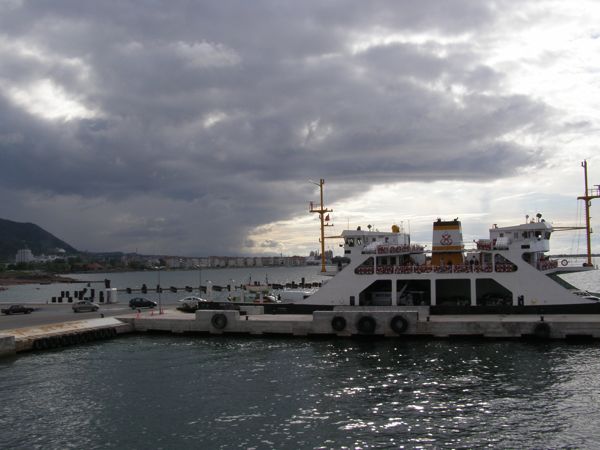 The Gebze-Yalova ferry across the Marmara

Now that I live on the Bosphorus, I’ve taken ferries from Beşiktaş to Üsküdar, as well as smaller rides between the nearby communities of Bebek and Emirgan. Ortaköy offers a small tourist ferry ride all summer, where for a mere 5 lira you can ride up the Bosphorus to the next bridge and back down, just to relax and enjoy the beauty of the Bosphorus. It’s grand. 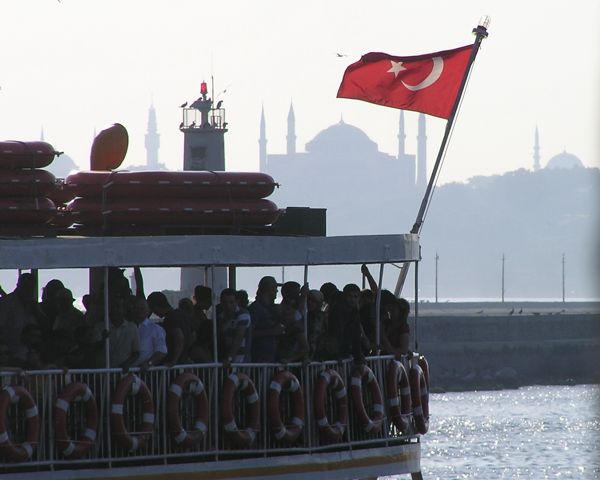 What could be more Turkish than this!

4 thoughts on “Frequenting the Ferries of Istanbul”