A WALK ALONG BAGDAT STREET

People are what keeps our world interesting, don’t you think? I continue to be
amazed at the variety of people I run across in this very different world of
Istanbul, where security guards and service bus drivers are an integral part of
our lives. I enjoy getting out into greater Istanbul, away from
the quiet, predictable life on campus.

After school last Friday I took a staff service bus to a doctor’s appointment
near Bagdat Street, and from there I headed off with my camera. I met a
balloon man in Goztepe Park, who kindly posed for a picture. Of course, he
didn’t really smile until AFTER the photo—I think a lot of the older men here
see photography as a formal portrait thing, which is very sweet. 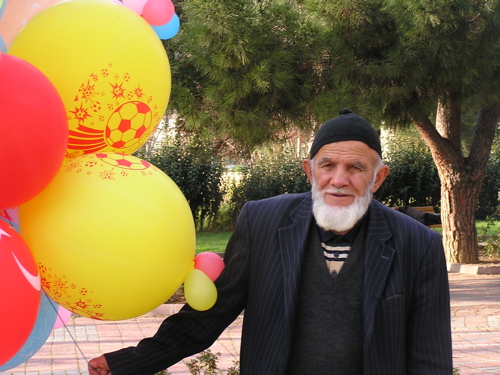 The next person who caught my camera lens was a flower seller, one of many
along Bagdat Street. Instead of using florists, people pick up their household
bouquets from flower stands along the sidewalk. This flower seller was a
lovely young woman; usually they’re older. Maybe she was sitting in for her
mother or something. 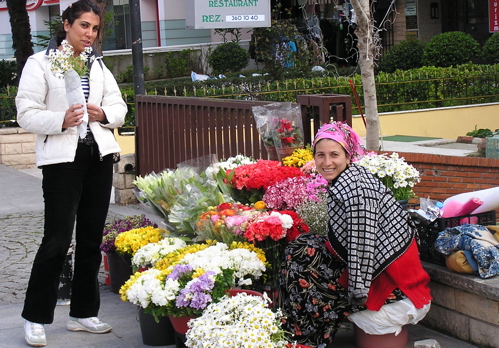 In the next block I was surprised to find a tired old black lab asleep on the sidewalk with
glasses perched on his nose. It was too cute. He was advertising for his
cheerful master, who sat beside a table strewn with sunglasses and reading
glasses. We exchanged pleasantries, I resisted the temptation to purchase yet
another pair of reading glasses, and I continued on my way. 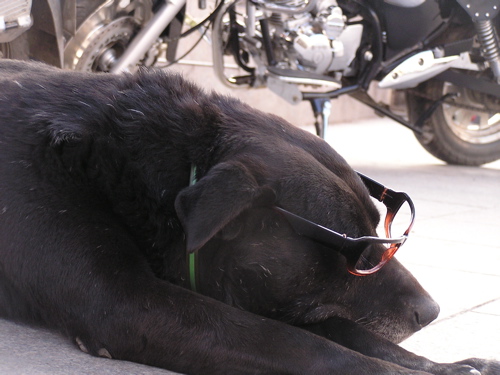 Down the block I found an even more creative advertising ploy: a hairless
woman sitting in a wheelchair with a knee brace, a wrist brace, a neck brace,
and various other therapeutic devices. Poor thing didn’t have much else on.
Fortunately she was a mannequin, cleverly posted outside a drug supply store.
Hmmm… (note the flowers out already—eat your hearts out, Minnesotans!) 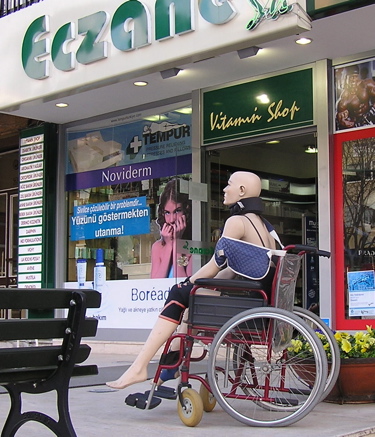 I met my friend Sarah for dinner, and she came back to campus with me for our Saturday adventure,
which brought quite a different kind of people. Our Angelic
Ileyn had arranged a service bus to the Halk Art copper factory on the far
side of Istanbul. You have to understand that the Koc School sits on the far
eastern edge of Istanbul, 30K from Sultanahmet. Well, the copper factory is on
the far western edge of the city, probably equally far on the other side. It took us
two hours to get there (Istanbul traffic).

Our first stop was downstairs, where the air reverberated with pounding,
drumming, and thrumming—the sounds of copper craft. It took some time to
adjust to the racket, then we fanned out with our cameras, each eager to capture
the feel of the copper works. Each man sat in a chair pounding a different
type of copper pot, tray, or pan. 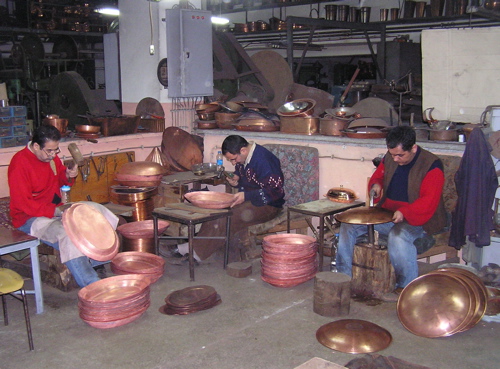 One sat between tall stacks of oval
cylinders of copper, tamping each rim even along the circular edge, preparing
it, no doubt, for a bottom. Surrounded by piles, stacks, and bins of copper
materials, these men could take a flat sheet of copper and make it into a work
of art in minutes. Pretty amazing, if you ask me. 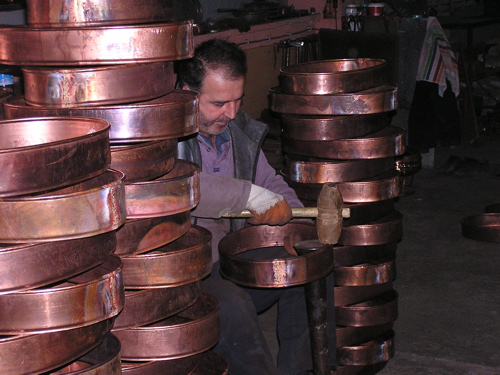 We went upstairs and chose our wares—items that normally sell for two or three
times as much in the States. I bought a few frying pans, a colander, a
sunburst for my door, and a few other little things. We had taken a tour bus
with storage beneath, a lucky thing, since three people bought huge
mirrors, and five others emerged with huge copper tray tables. Tracy bought
a wooden trunk! Go figure! (The shop also has an upper floor of antiques.)

It was a people weekend, all right. We finished it off with a trip back into
the city to celebrate St. Patrick’s Day at a Irish Pub. The ride there was an
adventure in itself. We took a dolmus (a van-like taxi) from Bostanci for what
is usually a half-hour ride to Taksim. Unfortunately, the Friday night traffic
was horrendous. Our driver (clearly an aficionado of Mr. Toad’s Wild Ride)
tore through the back roads of Istanbul at a deadly pace. We eight passengers
swayed and bounced in the back, clinging to handholds and praying for
deliverance. I never had any idea where we were, though we did dart across
main streets occasionally along our route. An hour later we were
deposited at Taksim, a little rattled, but injury-free. (We heard later
that the normal route would have taken two hours.) We were greatly relieved
to finally mount the steps to the Cadde I Kebir pub, where we drowned our
anxieties in green beer and rubbed elbows with international folks like ourselves.

Did I say it’s all about PEOPLE? (Well, maybe people and beer.)